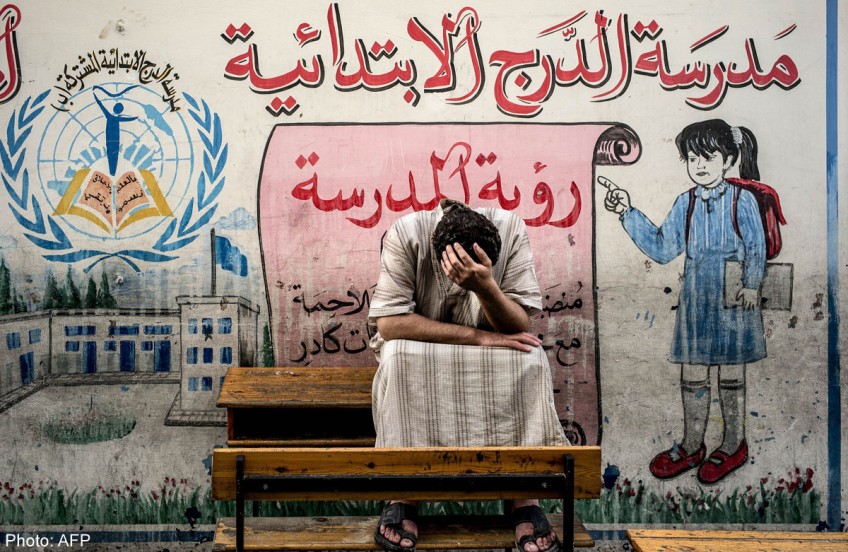 A displaced Palestinian from the Shejaiya neighborhood in the Gaza Strip sits on a bench at the UN school where he and others have taken refuge after fleeing heavy fighting in their area.

GAZA CITY, Palestinian Territories - The death toll in Gaza rose to 509 on Monday following the bloodiest day in six years in the Palestinian enclave where Israel is pressing a punishing military operation.

According to figures released by emergency services spokesman Ashraf al-Qudra, some 15 people were killed in several strikes across Gaza on Monday and 45 bodies were pulled from the rubble in areas hit by heavy fighting a day earlier.

Separately, the Israeli army said it had killed "more than 10 militants" who had infiltrated southern Israel through two cross-border tunnels.

Militants killed inside Israel are not included in Qudra's Gaza toll.

Among those killed on Monday was a family of nine who died in an Israeli strike on a house in the southern city of Rafah, he said.

Seven of the victims were children.

Four more people were killed in various strikes to the south and east of Gaza City, while another died in the northern town of Beit Hanun. There was also one other casualty in Rafah, he said.

Of the 45 bodies recovered on Monday, 11 were from Shejaiya, hiking the death toll from a blistering Sunday attack to 72 dead, he said.

Qudra has said 80 percent of the victims in Shejaiya were women, children and elderly people, with around 400 people wounded.

Another 23 of the bodies were pulled from a three-storey house belonging to the Abu Jamaa family in the southern city of Khan Yunis which was hit on Sunday, raising the overall death toll from a single strike to 28, Qudra said.

In a separate development, the Israeli army said it had killed "more than 10" militants early Monday who had infiltrated southern Israel through two cross-border tunnels.

So far, Palestinian figures show 509 Gazans have been killed and more than 3,150 wounded since the start of the Israeli campaign to stamp out cross-border rocket fire on July 8.

On the Israeli side, 20 people have died, including two civilians killed by rocket fire and 18 soldiers who were killed since the start of a ground operation late on July 17.

Army figures say 53 soldiers were injured on Sunday alone, five of them severely and 13 moderately, while military radio put the overall injury toll at more than 90 soldiers since the ground assault began.

Since the Israeli military started Operation Protective Edge on July 8 in a bid to stamp out rocket fire, Palestinian militants have fired 1,465 mortars and rockets that hit Israel, with the Iron Dome air defence system intercepting another 387, the army said.

Approximately 40 stuck Israel on Monday, one of them in the greater Tel Aviv area, while another 11 were shot down, the army said.