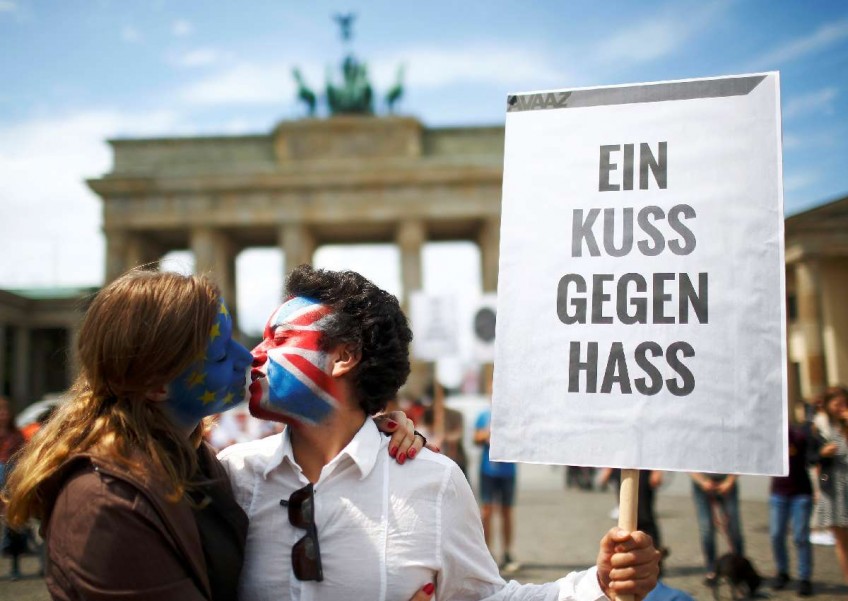 BERLIN - Most Germans back their country's membership of the European Union and do not want a U.K.-style referendum, and they also do not expect other EU member states to follow Britain's example in voting to leave the bloc, a poll showed on Monday.

Germany, the EU's economic powerhouse, has been shocked by British voters' decision in last Thursday's referendum to back'Brexit', but Chancellor Angela Merkel, Europe's most powerful leader, has also said Britain should not be pressed into negotiating a quick divorce against its wishes.

Eurosceptic parties across Europe have called for their own countries to hold referenda on EU membership, but a Forsa poll published in Monday's edition of the Handelsblatt newspaper showed little public support for this in Germany.

Eighty two percent of Germans polled by Forsa said they would vote to remain in the EU and only 14 percent would back withdrawal. Seventy one percent were opposed to a U.K.-style referendum in Germany, while 27 percent said they backed one.

The Forsa poll, which canvassed the views of 1,005 people on June 24, the day after Britain's referendum, also showed that a narrow majority of Germans, 51 percent, did not expect other EU member states to quit the EU against 42 percent who did.

Some Europeans have expressed concern that 'Brexit' may trigger a wave of referenda that could destroy the EU.

However, Germany's constitution only foresees a referendum being held if the borders of the country's 16 federal states are to change or if any of them are to fuse, a spokesman for the justice ministry said. If two states were to merge, for example, a referendum would only be held in those two states, he added.

Germans are not keen on popular plebiscites at the federal level after a referendum in 1934 combined the posts of chancellor and president, cementing Adolf Hitler's grip on power. But referenda are sometimes held at the state level.

Volker Kauder, a close ally of Merkel, told public broadcaster ARD on Monday that he was not in favour of Germany holding a referendum on its EU membership. "I think we have shown in our post-war history that our representative democracy is successful," he said.