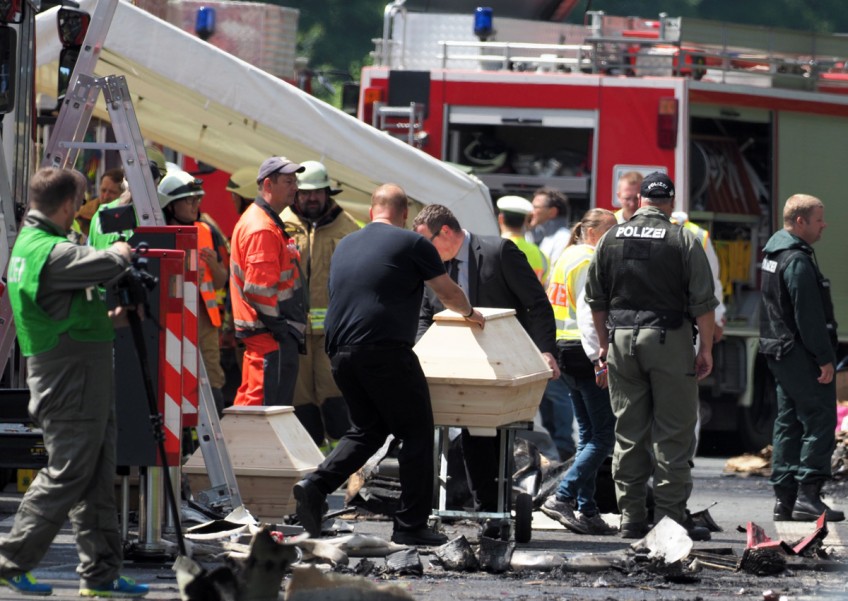 Up to 18 people were feared dead after a tour bus burst into flames following a collision with a trailer truck, police said.
AFP

STAMMBACH, GERMANY - Eighteen people were killed Monday in one of the deadliest road accidents in recent Germany history when a tour bus carrying pensioners smashed into a trailer truck and burst into flames.

Emergency workers retrieved 11 bodies and a search for the remains of seven other victims was underway, Transport Minister Alexander Dobrindt said.

The blaze was so powerful "that only steel parts are still recognisable on the bus, and from that you can understand what it means for the people on this bus," he said.

Thirty people were hospitalised, two of them with life-threatening injuries, the minister told reporters at the site of the accident.

The bus was carrying 46 passengers and two drivers from the east German state of Saxony, heading for Nuremberg, when it rammed into the truck in a traffic jam on the A9 motorway, Bild newspaper said.

The accident happened near the small Bavarian town of Stammbach, in a region dotted with spas and castles that are popular with summer vacationers.

Television images showing only the charred skeleton of the vehicle remaining.

"Our thoughts and condolences go to the victims and their family members, as well as to the injured," a spokesman said. "We hope that those who have been rescued will recover from their injuries."

Some 200 emergency workers were deployed to the site, including firefighters, rescue personnel and police, while south-bound traffic on the motorway remained blocked.

With the likely toll, the accident at the start of the summer holiday season is one of the worst to hit Germany in recent memory.

In June 2007, 13 people were killed when a tour bus plunged down a slope in eastern Germany's Saxony-Anhalt state.

In September 1992, 21 people died when a bus swerved out of its lane and struck a truck before ramming into the road divider in the southwestern Black Forest, another big tourist destination.

Across Europe, the last fatal accident on a similar scale was on January 21 in Italy, when an accident involving a Hungarian bus carrying teenagers left 16 dead.

In France, a head-on crash in October 2015 between a truck and a bus carrying pensioners claimed 43 lives.