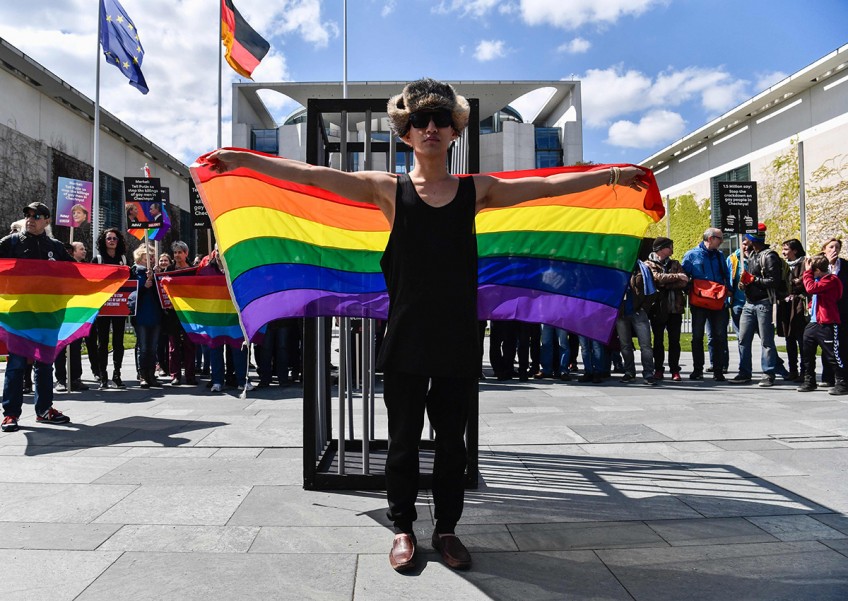 The election-year bill was pushed by Merkel's leftist rivals, who pounced on comments she made early this week suggesting a policy U-turn - a manoeuvre that left her conservative lawmakers fuming.

Merkel allowed her Christian Democratic Party (CDU) lawmakers to vote their conscience on the bill rather than follow the party line, and it passed by a vote of 393 to 226 on parliament's last day before the summer recess.

But Merkel said Friday that she voted against the legalisation because she believes marriage is the preserve of a man and a woman.

"To me, marriage as defined in the German constitution means the marriage between husband and wife, and that is why I voted against the law today," she said.

But she did say that her thinking had changed on the question of child adoption by same-sex couples, which she long opposed.

"I have thought a lot about the matter of child welfare and have now... come to the conviction that same-sex couples should be able to jointly adopt children," she said.

After the law passed, which prompted jubilant proponents to throw confetti in the Bundestag, the German legal code will change to say "marriage is entered into for life by two people of different or the same sex".

The upper house has already approved the measure, which is expected to enter into force before the end of the year.

Renate Kuenast of the Greens party, which has pushed for decades for LGBT rights, quipped cheerfully: "I would advise all registry offices in the country to boost staff numbers."

Gay and lesbian groups cheered the push for marriage equality in Germany, where so-called civil unions for same-sex couples were legalised in 2001.

"It's a real recognition, so it warms the heart," said French engineer Christophe Tetu, 46, who lives in Berlin with his partner Timo Strobel, 51.

"We're thinking about having a party, getting married and using our new rights to protect our relationship," he told AFP.

Strobel said he too was "overjoyed" that the couple would be able to show family and friends "that we are committed to each other, that we will stay together and we will spend our lives together".

The rapid series of events kicked off with an on-stage interview Merkel gave Monday to women's magazine Brigitte, in which an audience member asked her: "When can I call my boyfriend my husband if I want to marry him?" Merkel, who had long opposed gay marriage with adoption rights, replied that her thinking had shifted since she met a lesbian couple who cared for eight foster children.

She said she favoured an eventual vote when all lawmakers could follow their conscience rather than a party line.

Many read the surprising comments as a move to rob opposition parties of a strong campaign issue before September 24 elections.

Merkel's current coalition partners, the Social Democrats (SPD), had declared a gay marriage law a red-line demand and precondition for any future alliance - as had the Greens, the far-left Linke and the pro-business Free Democrats.

On Tuesday, after much buzz on social media, the SPD leader and candidate for the chancellory Martin Schulz took Merkel at her word and broke coalition ranks to call for an immediate vote.

The CDU slammed the tactic as a "breach of trust" after four years of joint rule.

But during friday's emotional parliamentary debate, one SPD lawmaker angrily criticised Merkel, accusing her of "pathetic and embarrassing" meandering on the issue.

"Mrs Merkel, thanks for nothing!" said Johannes Kahrs, a gay rights activist, charging that she had blocked progress on gay and lesbian rights for years.

He characterised her Monday-night comments as a "Schabowski moment" - a reference to the communist East German official Guenter Schabowski, whose fumbling comments at a 1989 press conference sparked the mass rush to border crossings that brought down the Berlin Wall.