Getting Covid-19 more than once raises risk of heart or lung problems: Study

Researchers have warned that people who suffer Covid-19 reinfection are twice as likely to die when compared with those who have only experienced one infection.

Getting reinfected with Covid-19 has been linked to a range of serious health problems, according to a new study from the US.

A study published in Nature Medicine earlier this month found that reinfection further increases the risks of adverse health outcomes.

Ziyad Al-Aly, the corresponding author of the study and the chief of research at the Veterans Affairs Saint Louis Health Care System and clinical epidemiologist at Washington University in Missouri, said people must focus on the prevention of infection and reinfection.

"Reinfection is not benign. People who had prior infection with Sars-CoV-2 and get it again (reinfection) are at increased risk of complications (hospitalisation, death, and organ injury) in both the acute and post-acute phase of covid," Al-Aly said.

The researchers of the study used data from the US Department of Veteran Affairs national healthcare database and compared outcomes for 5.3 million people who had not been infected; more than 443,000 people with one confirmed Covid-19 infection; and another group of nearly 41,000 people who had two or more infections.

The authors found that people who had suffered reinfection were twice as likely to die and three times more likely to be hospitalised, when compared with those who had only experienced one infection.

The authors also discovered that compared to those noninfected people, repeated coronavirus infection increased the risk of adverse health effects with each infection. 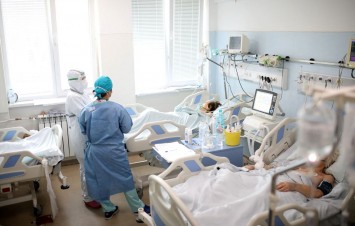 The study also finds that reinfection contributes to additional health risks in the acute phase — the first 30 days after reinfection — and in the post-acute phase, which covers the following six months.

However, Al-Aly said the study did not necessarily mean that second infections were worse than the primary ones.

"What the paper actually shows is that additional infections come with additional risks. They may be smaller than those of a first infection, but they can pile up over time," Al-Aly told Time magazine.

"If your risk was X" after the first infection, after the second one "it's X plus Y", he said.

"We need a vaccine strategy 2.0 that blocks transmission, for example, nasal vaccines that induce strong mucosal immunity. [We also need] variant-proof vaccines and more durable ones that, ideally, last for a full year," Al-Aly said.

However, Jin Dongyan, a virologist with the University of Hong Kong, said reinfection was not a common phenomenon and people did not need to worry too much about that.

"The reinfection rate is quite low and it is not a common phenomenon. Even though people get reinfected, for most of them their symptoms are less severe," Jin said.

"Developing severe symptoms in a reinfection is a small probability event… and the reason requires a case-by-case study."