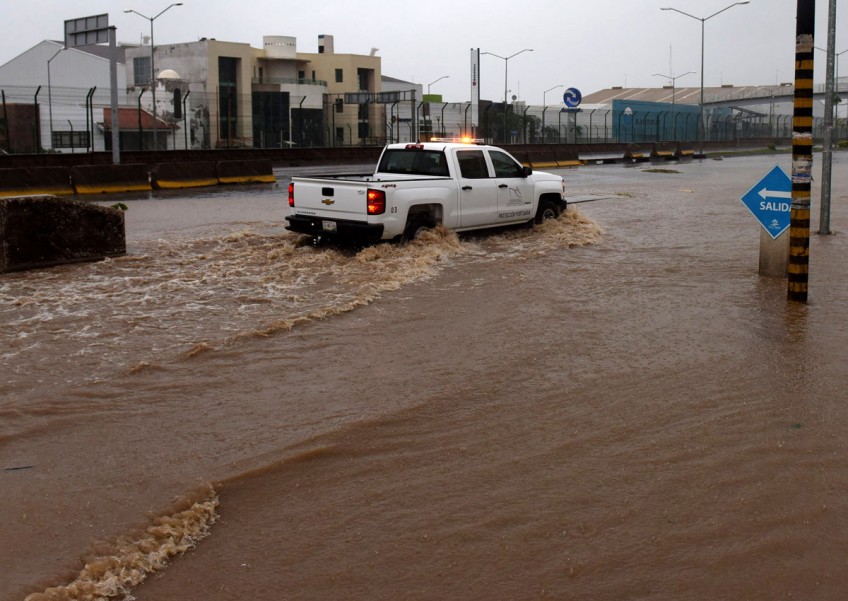 Record-breaking Hurricane Patricia rumbled across western Mexico on Friday, uprooting trees and triggering some landslides but causing less damage than feared so far for such a massive storm, officials said.

Patricia had grown into the strongest hurricane ever recorded hours before reaching the coast, raising fears that it would bring death and destruction across the country.

But almost five hours after landfall, President Enrique Pena Nieto addressed the nation on television, saying that the first reports "confirm that the damages have been smaller than those corresponding to a hurricane of this magnitude." But Pena Nieto urged Mexicans to stay in shelters, warning that Patricia still posed a threat, with heavy rain expected across several regions.

"We can't let our guard down yet. I insist, the most dangerous part of the hurricane has yet to enter the national territory," said Pena Nieto, whose country has seen deadly devastation from hurricanes before.

The hurricane crashed ashore in the town of Emiliano Zapata in the early evening, about 95 kilometers (60 miles) west of the major port of Manzanillo, according to National Water Commission director Roberto Ramirez.

The US National Hurricane Center said Patricia weakened marginally when it made landfall, with maximum winds of 270 kilometers per hour.

As it moved further inland late Friday, the hurricane was downgraded to category four, with 215 kph winds, and remained "extremely dangerous," the centre said.

Patricia peaked at 325 kph several hours earlier - more powerful than the 315 kph winds of Super Typhoon Haiyan, which left more than 7,350 dead or missing when it struck the Philippines in November 2013.

But Jalisco Governor Aristoteles Sandoval wrote on Twitter that "there have been no reports of deaths for the moment." More than 6,300 people were in shelters in Jalisco.

In the state of Colima, where Manzanillo lies, some 350 trees ripped out of the ground "but fortunately there is only material damage," Agriculture Minister Jose Calzada told Milenio television.

Stores shut down in the resort of Puerto Vallarta, where some 7,000 foreign and 21,000 Mexican tourists had come for vacation ahead of the storm.

Seafront hotels were evacuated and several tourists were moved to shelters.

Federal officials said 3,500 people were evacuated from Puerto Vallarta by bus and plane.

A Red Cross facility turned into a shelter for 109 people in Puerto Vallarta, including Americans, Canadians and Italians.

"I had the bad luck of being at the wrong place in the wrong time," said Gian Paolo Azzena, a 26-year-old Italian medical school graduate. "I found out that a hurricane was coming thanks to a craftsman. I thought it was a joke." A handful of people waited at a bus station before service ended at midday, while others bought water and loaded vehicles with jerricans of fuel.

Some 20 people were even seen drinking at a beach bar earlier in the afternoon, but heavy rain began to fall later in the evening.

US President Barack Obama said American disaster aid experts were on the ground and primed to help.

Tens of thousands of US tourists are among those in the hurricane's path, US officials said.

Authorities shut down power along the coasts of Jalisco and Colima states to prevent electrocutions.

In Colima, villages around the Volcano of Fire were emptied over concerns that ash that accumulated during recent volcanic activity could combine with water to produce landslides.

Patricia was expected to dump up to 51 centimeters (20 inches) of rain over five western Mexican states, which could trigger life-threatening flash floods and mudslides.

But it was expected to weaken rapidly as it moved further inland and be downgraded into a tropical storm on Saturday morning.

The National Water Commission said Patricia was "so big and intense" that it could cross the entire country, reach the Gulf of Mexico, and make landfall in the United States.