Giant panda gives birth in Washington, but who's the daddy? 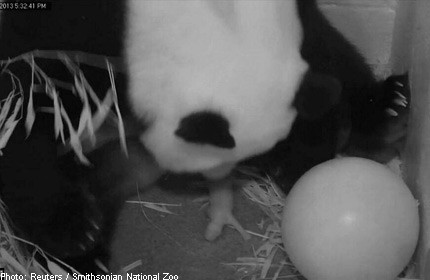 A panda delivers her cub at the Smithsonian National Zoo in Washington August 23, 2013.

WASHINGTON - A giant panda gave birth to a cub at the Smithsonian National Zoo in Washington on Friday - though it's not immediately clear who the father might be.

The birth of the cub, which has not yet been named, is the third for the mother, 15-year-old Mei Xiang, who could be seen cradling the new arrival on the zoo's "Panda Cam" shortly after giving birth on Friday evening.

The baby panda appears healthy, said zoo director Dennis Kelly, adding that scientists will take a closer look at it in the next couple of days.

The cub was conceived through artificial insemination on March 30, using a mixture of fresh and frozen semen collected from two different male pandas, the zoo said. One was Tian Tian, who lives in the National Zoo, the other Gao Gao, a resident of the San Diego Zoo.

Scientists will perform a paternity test in the coming weeks to figure out which male panda sired the cub, the zoo said.

Giant pandas are one of the world's most endangered species. Their natural home lies in a few mountain ranges in central China. There are about 1,600 known to be living in the wild and some 300 in captivity, mostly in China.

Female pandas are able to conceive only for two or three days in the spring, which makes reproduction difficult. The gestation period is about five months.

Tian Tian, was given a chance to impregnate Mei Xiang on his own before zoo breeders resorted to artificial means. Most pandas bred in captivity are conceived through artificial insemination.

Determining whether a panda is pregnant can be tricky. Females can experience a "pseudopregnancy" that causes hormone spikes and changes in behaviour, such as reduced appetite and mobility - similar to the symptoms of an actual pregnancy.

Scientists saw no evidence of a foetus the last time they administered an ultrasound on August 5, but suspected a baby might be on the way about a week later, when Mei Xiang started spending long hours licking her body and cradling her toys.