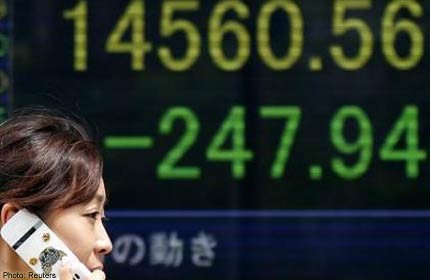 LONDON - World shares were testing a five-year high on Monday as a strengthening of Japanese Prime Minister Shinzo Abe's grip on power in weekend elections were seen as a boost for his radical stimulus policies.

European stocks saw a steady start to the week, dipping 0.1 per cent as upbeat results from Philips and Julius Baer helped offset the temptation to book profits on the 9 per cent gain the FTSEurofirst 300 index .FTEU3 has made since June. .EU

A 0.5 rise in Japanese stocks had lifted Asia's markets overnight after Abe's big Upper House election win, though a rebound in the yen prompted some profit taking on the Nikkei cutting its early gains in half. .T

The rise left MSCI's world share index .MIWO00000PUS within touching distance of the five-year high it hit at the end of May. It added to the recent gains built on generally strong company earnings and reassurances of central bank support.

"We are seeing a bit of position adjustment today but we have got a general positive outlook and I don't think the trend is going to break," said Societe Generale strategist Kit Juckes.

The election victory "frees up Abe's hand to get on with the third reform arrow of his strategy but in terms of the market there was never really any doubt over how this was going to play out.

Abe's win is expected to be negative for the yen going forward but after an initial dip on Monday, some dollar selling by Japanese investors, which in turn triggered stop-loss selling in thin conditions, saw the Japanese currency bounce back.

Against the dollar, the euro was virtually unchanged from late New York levels at $1.3144, while the Australian dollar advanced 0.4 per cent to $0.9225, buoyed by Friday's move by China - Australia's single biggest export market - to ease lending rules.

In debt markets, benchmark Bund futures were flat while peripheral euro zone bonds made early ground after a move by Portugal's President to keep the country's coalition government intact patched over its recent troubles.