The 2,300-kilometre (1,400-mile) World Heritage-listed reef suffered its most severe bleaching on record last year due to warming sea temperatures during March and April.

Initial aerial and in-water surveys showed 22 per cent of shallow water corals were destroyed in 2016, but it has now been bumped up to 29 per cent and with the reef currently experiencing an unprecedented second straight year of bleaching, the outlook is grim.

"The amount of coral that died from bleaching in 2016 is up from our original estimates and, at this stage, although reports are still being finalised, it's expected we'll also see an overall further coral cover decline by the end of 2017."

Bleaching, which occurs when abnormal conditions such as warmer sea temperatures cause corals to expel tiny photosynthetic algae, draining them of their colour, also extended to deeper corals beyond depths divers can typically survey.

But mortality of those reefs could not be systematically assessed.

The most severely impacted region was an area north of the popular tourist town Port Douglas, where an estimated 70 per cent of shallow water corals have died.

Cairns and Townsville, also hugely popular tourist destinations, are among the regions hardest-hit from the 2017 bleaching event, although southern parts of the natural wonder escaped the worst.

Corals can recover if the water temperature drops and the algae are able to recolonise them, but it can take a decade.

The reef is already under pressure from farming run-off, development and the crown-of-thorns starfish, with the problems compounded this year by powerful cyclone pummelling the area. 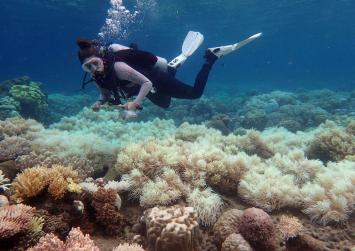 Reichelt said the storm impacted a quarter of the reef but a complete picture for 2017 would not be available until next year.

The GBRMPA hosted a summit last week of more than 70 of the world's leading marine experts to work on a blueprint on how best to respond to the threats.

Key to the talks was the need to slash greenhouse gas emissions to prevent warming sea temperatures.

"The Great Barrier Reef is a large and resilient system that's previously shown its capacity to bounce back, however the current changes are undermining the resilience of the reef," said Reichelt.

"Summit participants voiced their strong concern about the need for global action to reduce greenhouse gas emissions, the driver of climate change."