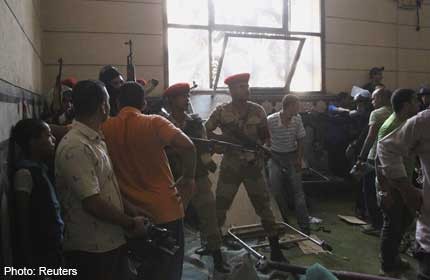 Army inside room of al-Fath mosque when supporters of deposed President Mursi exchanged gunfire with security forces inside mosque in Cairo.

After security forces had besieged the mosque since Friday night, the police managed at one point to get inside and drag some of the holdouts outside, where they were confronted by hostile crowds.

The police fired into the air to keep the mob at bay.

The correspondent said the police and troops began to storm the Fath mosque in the centre of the capital when they were fired on from the minaret.

The security forces responded by firing tear gas into the mosque and pressing their assault.

In the process, they managed to drag outside seven or eight men and were then confronted with angry neighbourhood residents who attacked them with sticks and iron bars.

One man dressed in civilian clothes was wounded by police gunfire.