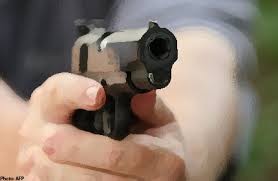 A police SWAT team stormed a rural Louisiana bank early on Wednesday, killing a gunman after he shot and critically injured two hostages, in a dramatic end to a 12-hour standoff.

State Police spokesman Albert Paxton said officers entered the bank building in the small town of St. Joseph shortly after midnight because the gunman was threatening to kill one or both of the hostages he was holding.

The man, identified as 20-year-old Fuaed Abdo Ahmed, the California-born son of Yemeni parents, shot both hostages when police entered the building. Police then shot and killed him, Paxton said.

"He was angry and he wanted to kill hostages," Paxton said of the gunman, who initially took three bank employees hostage but released one woman after several hours.

Paxton said Ahmed was mentally ill and had complained of hearing voices. The gunman's family owned a convenience store in the town, officials said.

The wounded hostages, previously identified as one woman and one man, were taken to local hospitals. Their names were not released.

The drama took place at the Tensas State Bank in St. Joseph in northeastern Louisiana, a town of less than 1,200 people.

Police said Ahmed had intended to take hostages from the beginning. They found books on hostage negotiation in his home.