Put down whatever you're eating or drinking right now before you proceed with this piece of news.

Residents and farmers of Lady Frere in Eastern Province, South Africa have been living in fear since a sheep gave birth to a 'half-human, half-sheep' offspring.

Although verified to be 100 per cent lamb, it looks eerily similar to a human baby and has many recognisable human features.

The images ahead can unsettle both your stomach and your heart.

Superstitious locals think that bestiality or witchcraft are at play, with pictures of the monstrosity circulating rapidly on social media.

Some believe it was sent to Earth by the devil:

Some think it's because somebody had intercourse with a sheep:

Damn you world for that imagery!

Others came up with their own theories, backed up by "evidence" from pop culture.

Isn't it interesting that this person has a picture of a cartoon animal as a display picture? Coincidence?

South African doctor Lubabalo Mrwebi, chief director of veterinary services however, has confirrmed that the pictures are not a hoax.

The cause for this stillborn? An early foetal development that went wrong as a result of the fetus infected by a virus called the Rift Valley Fever (RVF).

Dr Mrwebi told the Daily Mail that the gestation period for a sheep is five months, and that meant that the particular sheep was conceived in late December 2016 or early January 2017.

"It was a time of plentiful rainfall which brings with it many mosquitoes and midges which are carriers of viruses that cause the Rift Valley Fever in sheep.

'It is fair to assume, therefore, that the sheep was infected by the RVF virus.

"The infected foetus then, as a result, failed to form properly, leading to the deformity that it became," he said.

He also assured that the sheep is not part-human at all.

'It is worth noting that a sheep has 28 pairs of chromosomes while humans have 23 pairs which is important in dispelling the myth that a union of a sheep ovum and a human sperm can lead to a development of a viable life form," he reasoned.

"The lesson we are learning from this experience is that small stock farmers must keep their animals protected against diseases like the Rift Valley Fever with a correct vaccine, which is best given long before the mating season so that by the time the females get pregnant they are already protected against this disease," Dr Mrwebi said in an Independent Online report.

So there you have it. It is not a sign of the end of days nor that humans can impregnate animals.

Some suggested that the stillborn be purged with fire.

And that is exact sentiment that the locals hold.

"Many people are afraid and will not be happy until it is burned", said a local villager in The Sun report. 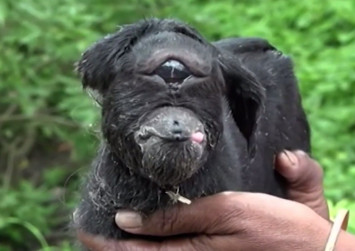 Amid all this negativity, shouldn't we have a moment of consideration for this poor stillborn who died before seeing the light of day? This poor soul which incited disgust worldwide because of a condition that it did not choose to have?

Perhaps if this sheep had been born in India, it could have been worshipped instead, like this human-like calf.