He said what? Prince Philip in quotes

LONDON - Britain's Prince Philip, who is to retire from public engagements at the age of 95, earned a reputation for his off-the-cuff remarks during his long career as the queen's consort.

Here are some of his most memorable lines:

"You're about to see the world's most experienced plaque-unveiler." - Opening a new stand at Lord's cricket ground in London in May 2017.

"(Children) go to school because their parents don't want them in the house." - To Malala Yousafzai, who survived an assassination attempt by the Taliban after campaigning for girls' right to go to school, in October 2013 - reducing her to giggles.

"There's a lot of your family in tonight." - After looking at the name badge of businessman Atul Patel at a reception for British Indians in October 2009.

"Do you know they're now producing eating dogs for anorexics?" - To a blind woman, in 2002. 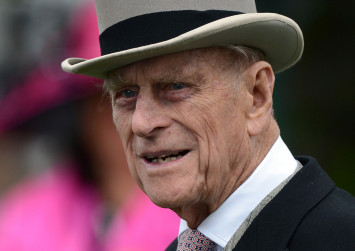 "Still throwing spears?" - An Australian Aborigine is quizzed during a 2002 visit.

"Deaf? If you are near there, no wonder you are deaf." - To a group of deaf people standing near a steel band in 1999.

"You managed not to get eaten, then?" - In 1998, to a student who had been trekking in Papua New Guinea.

"If a cricketer, for instance, suddenly decided to go into a school and batter a lot of people to death with a cricket bat, which he could do very easily, I mean, are you going to ban cricket bats?" - Campaigners wanting handguns banned are outraged in 1996, after 16 primary school children and their teacher are shot dead in Dunblane, Scotland.

"How do you keep the natives off the booze long enough to get them through the test?" - A driving instructor in Scotland is put on the spot in 1995.

"Aren't most of you descended from pirates?" - A Cayman Islander is quizzed on his heritage in 1994.

"It was part of the fortunes of war. We didn't have counsellors rushing around every time somebody let off a gun, asking 'are you all right - are you sure you don't have a ghastly problem?'. You just got on with it." - The formal naval officer dismisses stress counselling for service personnel during a television documentary for the 50th Anniversary of D-Day, in 1994.

"Oh no, I might catch some ghastly disease." - A request to stroke a Koala bear in Australia is declined, 1992.

"Your country is one of the most notorious centres of trading in endangered species in the world." - After accepting a conservation award in Thailand in 1991.

"If you stay here much longer, you'll all be slitty-eyed." - A group of British students is warned on a state visit to China, 1986.

"You are a woman, aren't you?" - Just checking, when a native woman in Kenya presents him with a small gift in 1984.

"Everybody was saying we must have more leisure. Now they are complaining they are unemployed." - Wide of the mark in 1981 at the height of the British recession.