Federal Bureau of Investigation Director Christopher Wray prepares to testify in a hearing on the FY 2023 budget for the FBI held by the Commerce, Justice, Science, and Related Agencies Subcommittee on Capitol Hill in Washington, US, on May 25, 2022.

"When you deal with a Chinese company, know you're also dealing with the Chinese government - that is, the MSS and the PLA - too, almost like silent partners", FBI Director Christopher Wray told business leaders in London, referring to China's spy agency and military.

"The Chinese government poses an even more serious threat to Western businesses than even many sophisticated business people realise," Wray added. "I want to encourage you to take the long view as you gauge the threat."

Addressing the business executives, McCallum said that "most of what is at risk from Chinese Communist Party aggression is not, so to speak, my stuff. It's yours".

"The world-leading expertise, technology, research and commercial advantage developed and held by people in this room, and others like you," he said, according to an official transcript.

"The Chinese Communist Party is interested in our democratic, media and legal systems," he added. "Not to emulate them, sadly, but to use them for its gain."

The joint appearance, said to be unprecedented, was intended as a show of solidarity between the US and Britain concerning what both governments consider the threat China poses to both economic competition and national security.

The officials also accused China of interfering in a New York congressional election because it did not want a former Tiananmen Square protester, Yan Xiong, to win.

Wray's comments were the latest warning from Washington about the risks that US companies face when doing business with Chinese firms, which have been accused of intellectual property theft, technology transfers and the exploitation of research programmes. 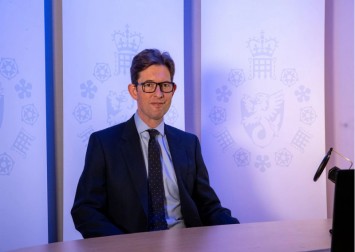 As US-China tensions have soared, Washington has taken repeated steps to crack down on business and investment ties between the two countries, beginning under then-President Donald Trump and continuing in the Joe Biden administration.

Already, the Biden administration has moved to expand a Trump-era ban on investments that might help China's military.

It has also expanded a warning to American businesses to avoid China's far-west Xinjiang region or else face legal and reputational risks because of Beijing's suspected human rights abuses against the Uygurs and other ethnic minority groups there.

At the same time, a large part of the US business community, especially companies with significant dealings in China, have tried to buck that trend, advocating for a return to a calmer relationship with Beijing - to the dismay of many politicians in both parties in Washington.

Major US industry groups have urged the Biden administration to lift tariffs on Chinese goods, for example, and lobbied against a sweeping bill that passed last year to ban all imports from Xinjiang because of concerns about forced labour there.

Asked for a response, Liu Pengyu, spokesman for the Chinese embassy in Washington said that "some US politicians have been tarnishing China's image and painting China as a threat with false accusations.

"We resolutely oppose their comments."