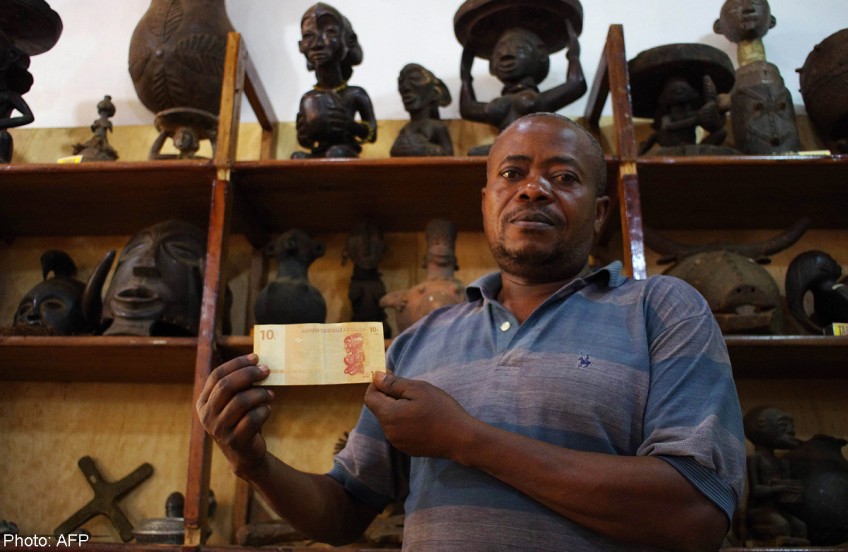 Perched on a shelf, the "Little Kabila" with the mysterious eyes greets visitors to the Kivu Museum, housed in a Catholic mission but aimed at safeguarding endangered Congolese traditional artefacts some might consider "satanic".

The statuette showing a woman sitting on her heels and holding a jar in her hands used to feature on all Congolese 10-franc notes, but is no longer in circulation.

Laurent-Desire Kabila himself, the father of Congolese President Joseph Kabila, had insisted she be represented in this way, according to guide Barthelemy Kayumba.

The museum lies hidden behind the walls of the mission of the Xaverian Fathers (Catholic missionaries of Jesuit influence) in Bukavu, the capital of South Kivu, in eastern Democratic Republic of Congo. In Luba language, "kabila means to share or distribute", said Kayumba.

For the Luba, an ethnic group from the country's southeast where the head of state was born, the statuette fulfils "a function of mutual aid and solidarity", he added.

It also held a "symbolic value" for Kabila senior, the rebel chief who in 1997 put an end to Mobutu Sese Seko's 32-year dictatorship: "The chief, or the mother, has to take care of the weakest and watch over the youngest," said Kayumba.

Like many items in the museum, the "Little Kabila" is a copy. But the Xaverian Fathers, who first arrived in the country in 1954, have also amassed a lot of authentic pieces, often created for the initiation or nomination ceremony of a "mwami" (chief), explains Father Italo. Having lived in the Congo for nearly 40 years, the Italian priest closely knew Father Andre, the museum's founder who is currently undergoing treatment in Europe.

For South Kivu, the end of this African regional war, which took place solely on DRCongo soil, did not bring peace. Like its Northern Kivu neighbour and other parts in the country's east, the province remains torn by violence and armed conflicts fuelled by Congolese or foreign militias.

The museum has managed all the same to gather an impressive collection of several hundred statuettes, masks and idols thanks to the co-operation of the village chiefs of South Kivu's main tribes (Lega, Bembe, Shi and Buyu), who provided the majority of the authentic pieces.

Because of their symbolic value, these artefacts have been handed down from chief to chief, some of whom now have real treasures in their possession.

One object is thought to be at least 100 years old, said Kayumba. The items had to be hidden from armed groups trying to steal them, he added.

Under Belgian colonisation (1908-1960) and with the arrival of Catholic missionaries, the tradition was quickly denounced as "witchcraft" and the Congolese were told to "leave it behind even though this was their way of life and there was a real school of wisdom behind it", says Father Italo.

In the Lega tribe, for instance, a chief's son does not automatically follow in his father's footsteps; instead, the council of elders choses the contender with the "highest moral values", Kayumba said. The museum's role is to "preserve the endangered collective memory of a people", adds Father Italo.

Outside the Xaverian covent, nothing hints at the existence of the little-known museum. Today, it attracts several thousand visitors per year, most whom come as a part of tours organised by schools or parishes.

"Many people are surprised that the Fathers who came to evangelise have ended up sheltering satanic objects," notes Father Italo. In the face of this deep-seated spirit, the museum's mission is to get visitors to "become aware" of their roots and "understand the sense and values of their culture".