Homeless man from Texas returns to university 4 decades after dropping out, thanks to student's help

One man from Texas, USA, is returning to university to obtain his degree after dropping out four decades ago, thanks to a student's help.

Ryan Chandler, a journalism and government student at the University of Texas, met David Chandler, a homeless man, at downtown Austin for a school assignment, as per KVUE on June 3. After their meeting, Chandler made it his goal to help Carter get back on his feet.

Carter apparently has been begging in the streets for the last few years. More than 40 years ago, however, he used to be a student himself in the university and had earned 87 credit hours toward a studio art degree. As per the Alcalde last May, Carter damaged his hand and had to drop out of college after losing his ability to draw. He only had one semester left to finish.

"He attributes the end of his collegiate career to an intoxicated accident in which he severely damaged his hand and lost his drawing ability and with it, his passion and his major," Chandler said in the report. "His hope for a degree was replaced with destitution, disability and dependence, a fateful combination that left Carter on the street, just as it does to so many other homeless individuals." 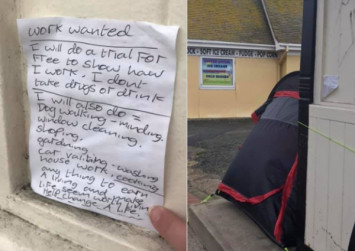 Chandler helped Carter fix his transcripts in a bid to get him admitted back into the university. Their efforts were not for naught. On June 2, Chandler took to Facebook to announce that Carter has been readmitted and will be continuing his degree.

"We did it y'all," Chandler said. "After 6 years of panhandling on the Drag, David Carter has been readmitted to UT and will resume his degree this week."

We did it y’all. After 6 years of panhandling on the Drag, David Carter has been readmitted to UT and will resume his...

In Chandler's post, Carter can be seen holding up a laptop to show his readmission to the university. Chandler added a Texas Ex has vowed to shoulder the entirety of Carter's tuition. It is reported that the university also helped by paying for Carter's application fee.

Now that Carter is returning to university, Chandler said Carter wants to start taking courses to help him focus on researching and writing a book about the civil rights movement.

"This summer, he will be taking his core history and Black Political Thought, which he hopes will help him continue his work on a book detailing the civil rights movement."