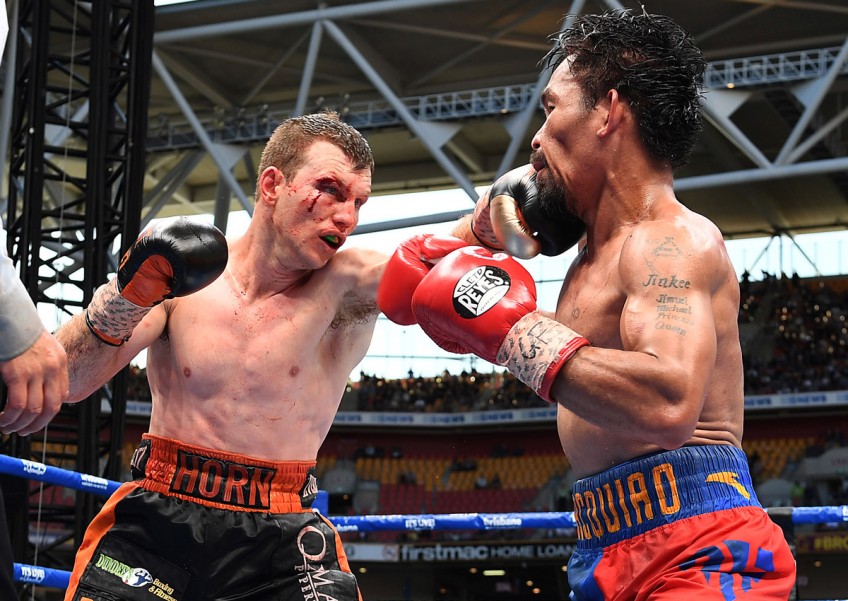 Millions of boxing fans in the Philippines, including those displaced by fighting in Marawi City, walked away in stunned disbelief as hero Manny Pacquiao lost his world title to Australian Jeff Horn in a major upset on Sunday.

Pacquiao, 38, is an elected senator and a unifying figure in the country beset by conflict, grinding poverty, and frequent natural calamities.

Residents in the war-torn city of Marawi had hoped for a respite by watching the 12-round fight in displacement camps but their idol's defeat silenced cheers and prompted many to stand up even before the announcement was over.

"We were expecting his hand to be raised as a winner but you cannot always win," provincial government spokesperson Zia Alonto Adiong said after helping organise a public viewing of the fight in a social hall in Marawi.

"Our morale is at its lowest but Pacquiao remains a symbol of resilience. In the same way that he is already a boxing icon, this crisis does not define who we are," she added.

Islamist militants who went on a rampage in Marawi on May 23 have triggered intense fighting that has killed more than 400 people and forced nearly 400,000 people to flee their homes.

As the "Battle of Brisbane" was under way, military helicopters continued bombing runs against the militants' positions.

In Manila, soldiers wounded from the clashes in Marawi watched a bloodied Pacquiao from screens set up in a military hospital.

Pacquiao bled profusely from cuts to the head high above both eyes, prompting boos from crowds gathered in gymnasiums in the capital.

"Pacquiao lost, but a battle is really like that. He is a true soldier because even if he is wounded he keeps attacking the opponent," Gen. Eduardo Año, Armed Forces of the Philippines chief of staff, told reporters.

Pacquiao's rags-to-riches story, from high school dropout to millionaire world boxing champion in an unprecedented eight weight divisions, is a huge source of pride in the Philippines.

In keeping with tradition, many Filipinos watched Pacquiao's fight in public places, including in restaurants and watering holes.

But crowds have gradually become thinner as Pacquiao hits the twilight of a glittering career.

"Horn almost fell in the ninth round. But of course it was a hometown decision," said Gener Celis, who was among some 300 residents who packed community centre in Makati City.

"Pacquiao is getting old but he can still deliver. It was a close fight. No hurt feelings but I'm ranting against Horn's fighting style, hug technique," Dexter Bernardez said.

The police reported a peaceful Metro Manila during the bout.

"From 10 a.m. to 1 p.m. of July 2, all district tactical operation centres reported no significant incident within their area of responsibility," Police Director Oscar Albayalde said in a text message.