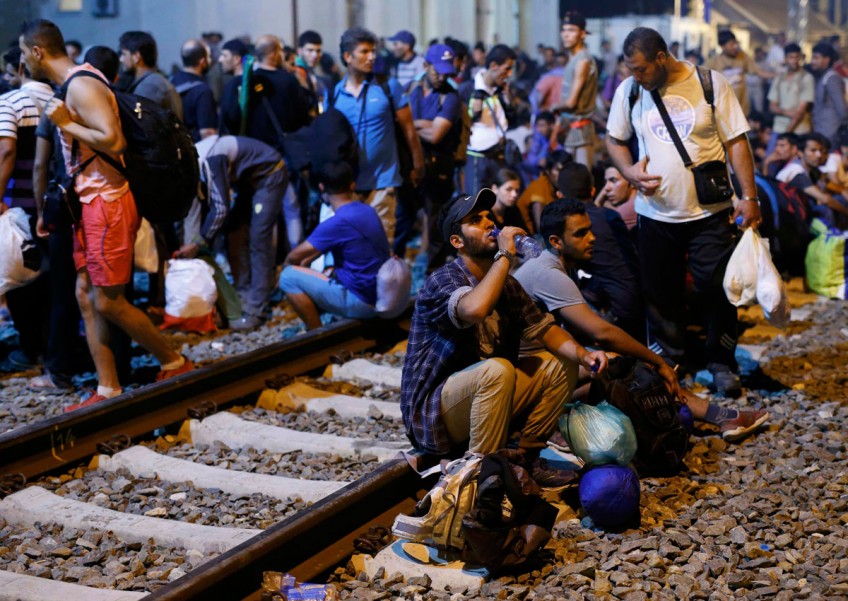 Migrants wait at the train station in Tovarnik, Croatia, on September 17, 2015. Amid chaotic scenes at its border with Serbia, Croatia said it could not cope with a flood of migrants seeking a new route into the EU after Hungary kept them out by erecting a fence and using tear gas and water cannon against them.
Reuters

"During the night work already began on building the technical border closure... It seems we can rely on help from no one," Orban said in an interview on public radio after thousands of migrants entered Croatia seeking to travel to northern Europe.

"Forces are being redeployed, 600 soldiers are already at the scene, 500 will arrive there in the course of the day, and several hundred at the weekend. Two hundred police have been assigned to the Croatian border," he said.

"There will be no sandhill or molehill to hide behind, we will defend our borders."

Hungary this week sealed its border with Serbia, cutting off a major entry point into the European Union for tens of thousands of migrants from the Middle East, Asia and Africa travelling up through the western Balkans.

This diverted more than 11,000 migrants from Serbia into Croatia, overwhelming local authorities and forcing Zagreb to close most of its border on Thursday.

Police said Friday that 453 illegal immigrants were detained in Baranya county -- next to the Croatian border -- by midnight (2200 GMT), mostly Syrians and Afghans.

"The western Balkans route is still there. The fact the Hungarian-Serbian border is now closed has not stopped the flow," Orban said.

The right-wing Orban has come under heavy criticism for Hungary's treatment of the migrants, particularly over the police's handling of clashes at the flashpoint Serbian border crossing of Roszke on Wednesday.

But Orban, while warning against the dangers of Europe letting in so many Muslims, says he is applying EU regulations and blames Greece for waiving the migrants through and Germany for relaxing asylum rules for Syrians.

[[nid:221584]]
SUBSCRIBE TO OUR NEWSLETTER
Your daily good stuff - AsiaOne stories delivered straight to your inbox