Husband of Clinton aide gets 21 months jail for sexting 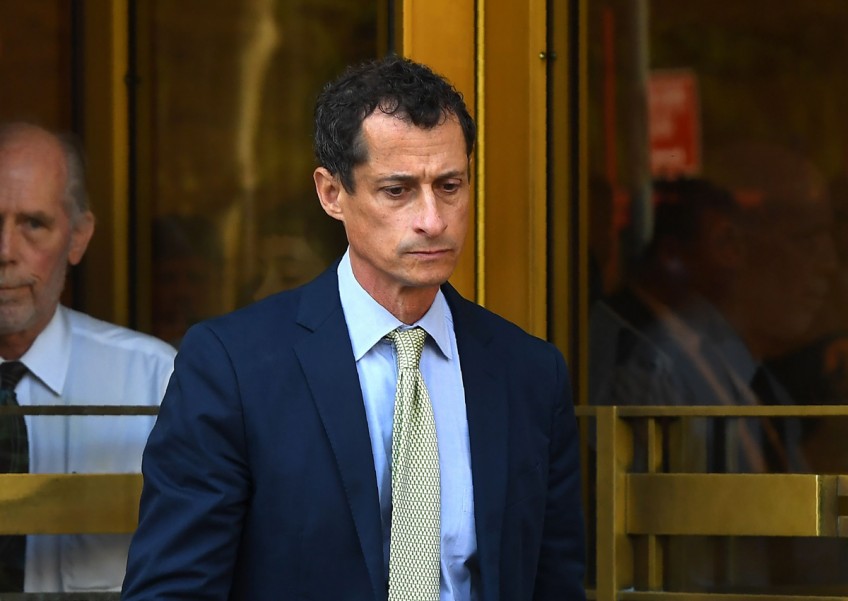 Anthony Weiner, a former Democratic congressman leaves Federal Court in New York September 25, 2017 after being sentenced for 21-months for sexting with a 15-year-old girl.
AFP

New York, United States - Anthony Weiner, the disgraced former US congressman and estranged husband of one of Hillary Clinton's closest aides, was sentenced to 21 months in prison on Monday for sexting a school girl.

The 53-year-old had pleaded guilty in May to sending explicit photographs and messages to a 15-year-old high school student last year as his wife worked on Clinton's presidential campaign.

The one-time rising star in the Democratic Party and former candidate for New York mayor must now surrender to prison authorities on November 6. He was also sentenced to three years supervised release.

"The crime I committed was my rock bottom," the father of one told the court, reading from a prepared statement and breaking down in tears.

Weiner, whose wife Huma Abedin is divorcing him, found himself in the eye of a major political storm last October when then FBI director James Comey effectively reopened an investigation into Clinton's email scandal just days before the presidential election.

The FBI acted after finding a batch of her emails on a computer belonging to Weiner, forwarded by Abedin. Clinton says the effective reopening of the investigation into the long-running email scandal played a key role in her shock defeat to Donald Trump.

"I was a very sick man for a very long time," Weiner told the court on Monday, appearing thin and gaunt. Abedin, Clinton's senior adviser during her election campaign, did not attend the hearing.

"I fully accept responsibility for what I did," said Weiner, dressed in a navy suit.

In a nod to a string of earlier sexting scandals, he called himself an "addict" and said he was getting treatment. As part of his guilty plea, Weiner registered as a sex offender.

"I live a better life today," he told the court.

But US prosecutors sought a prison term of between 21 and 27 months.

Judge Denise Cote said there was no evidence Weiner targeted underage girls and conceded he had progressed with treatment for his addiction. But she said it was important to send a message to society at large.

"This is a serious crime that deserves serious punishment," she told the court. "There is an opportunity to make a statement that can protect other minors".

Between January and March 2016, Weiner used online messaging and video chat to communicate with the girl via Facebook messenger, Skype and Snapchat, despite knowing that she was 15 years old.

In video chat sessions he asked her to display her naked body and engage in sexually explicit behaviour. US prosecutors said he also sent her a link to pornography.

"Justice demands that this type of conduct be prosecuted and punished with time in prison," said acting Manhattan US Attorney Joon Kim. "Anthony Weiner received a just sentence that was appropriate for his crime."

Weiner was forced to resign his seat in Congress in 2011 after a similar scandal in which he admitted to exchanging sexually explicit pictures and messages with at least six women. His wife stood by him at the time.

He was the subject of a fly-on-the-wall 2016 documentary, entitled simply "Weiner," that traced his New York mayoral election campaign over a period during which another sexting scandal broke. Abedin stood by him again.

In her tell-all memoir about the 2016 presidential campaign published this month, Clinton revealed Abedin's torment at learning that her husband was implicated in the FBI's decision to revisit her boss's email scandal.

"This man is going to be the death of me," she quoted Abedin as sobbing of Weiner.

Clinton hugged and stood by her aide, whom she has often compared to a daughter.