'I lost everything': Locals despair after South Korea fire

A house in Wonam-ri, Toseong-myeon, and a truck were burned in a fire that ravaged the town on Thursday.

Firefighting helicopters could be seen in the sky and fire trucks sped by on their way to put out fires that continued through the night.

A mountain fire, thought to be Korea's worst ever wildfire, had blazed through the area overnight, destroying an area the size of Seoul's Yeouido.

"Goseong has several big fires every spring, but I've never seen a fire like this before," Kim Young-joon, a taxi driver who has been working in Sokcho, Gangwon Province, for 23 years told The Korea Herald. 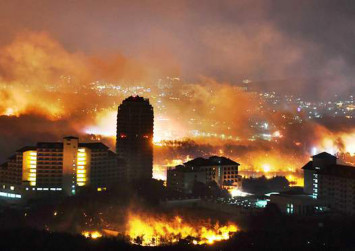 "The fires in the past only affected mountain areas, but last night's fire was especially serious as it spread to populated areas. My close friend has lost his entire house and storage unit, and another friend also lost his 2-story house and workplace overnight," the driver said, showing mobile phone pictures he received from the victims.

While he was driving, he got two calls from his acquaintances checking on his safety and asking about the fire. The driver said people living in the affected areas have been posting the damagers they suffered on social media.

"There was nothing people could do as the fire broke out at night. The wind was extremely strong as well, strong enough that a man couldn't stand upright. Cars flooded out onto the streets, and many were seen refueling at gas stations," Kim said.

Even though most of the fire appear to have been put out as of Friday afternoon, the acrid odour of smoke got thicker and heavier as the taxi approached Toseong-myeon, a town that was destroyed by the fire overnight.

It's one of several towns engulfed by the fire, which has killd at least one person and destroyed 250 hectares of forest as of 4 p.m. Friday, the Safety Ministry said.

The exact extent of the damage, however, is not yet known, as the fire continues in some places.

As the fire spread to residential areas, some 4,000 people were evacuated to emergency shelters set up at nearby schools and gyms on Thursday night.

"I lost everything. I received a few relief supplies, but I honestly don't know when I can go back to my house," Kim told The Korea Herald.

Kim, who was on his way home from his watch as a volunteer wild fire watcher, rushed to save his dog as soon as he received a text alert from Toseong-myeon office at around 7 p.m. There was no fire when he left his watch post at around 6 p.m., he said. According to fire authorities, the fire started at 7:17 p.m.

"I escaped from the burning house right after I brought out my dog. I couldn't bring anything else with me, and all I have now are these clothes that I was wearing last night. I had to watch my house burn from my car," Kim said, holding his 5-year-dog in his arm.

Kim Jung-soon, 74, from Songcheon-ri of Toseong-myeon, said she couldn't believe her eyes when she saw her house engulfed in flames on Thursday night.

"I came out of the house at around 8 p.m. last night as my dogs kept barking wildly. There were no signs of fire at the time, so I went back inside. But a few minutes later, my husband shouted at me to get out of the house as the flames were headed toward our house from everywhere," Kim said.

As soon as she saw the fire, she unleashed her dogs and escaped from the house with a small backpack. She barely managed to pack a few belongings, an ID card and a wallet.

When she returned to her house on Friday morning, the wooden house had been burnt down completely.

"I don't know where I should sleep tonight, but I don't want to go back to the place. I'm scared," Kim said with tears filling her eyes.

According to the Ministry of the Interior and Safety, 3,719 of the 4,011 evacuees have returned to their home as of 4 p.m. Friday.

Volunteers at the shelters handed out relief supplies, including blankets, clothes, toothbrushes and towels. On Friday afternoon, people lined up in front of a table to report their damages and get assigned a tent at the shelter.

"Some 100 members of Korean Red Cross came to the shelters to help the victims," a female volunteer in her 40s told The Korea Herald.

"We gathered at around 8 p.m. last night and stayed at the shelters until about 3 a.m. The relief activities resumed at 6 a.m. today."

The volunteers prepared breakfast for 450 people on Friday morning, and lunch for 200 people.

"My heart was broken, watching victims crying and worrying over their burned villages," the volunteer said.

As of Friday afternoon, the major fire was reported to have been put out, but smaller blazes continue, fanned by the strong winds.