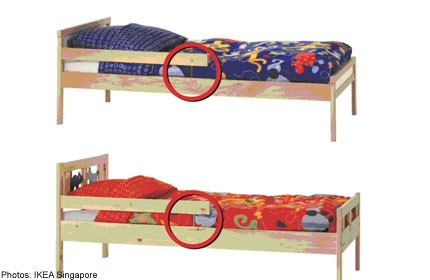 Furniture store IKEA has issued a recall for two models of its junior beds (above) after receiving reports that they may pose potential hazards.

STOCKHOLM - The world's leading furniture chain Ikea on Thursday issued a recall of two models of children's beds after several reported cases of a broken metal rod that exposed sharp edges. The beds are called Kritter and Sniglar.

To avoid children cutting themselves on the sharp edges, customers can either return the bed, exchange it at the store or pick up a free repair kit, Ikea said.

A spokeswoman for the group in Sweden, Anna Pilkrona Godden, estimated to AFP that about 10,000 beds of the two models had been sold in the Scandinavian country, but she was unable to specify how many beds had been sold abroad.