I'll have a rat with that: San Francisco's new rodent cafe 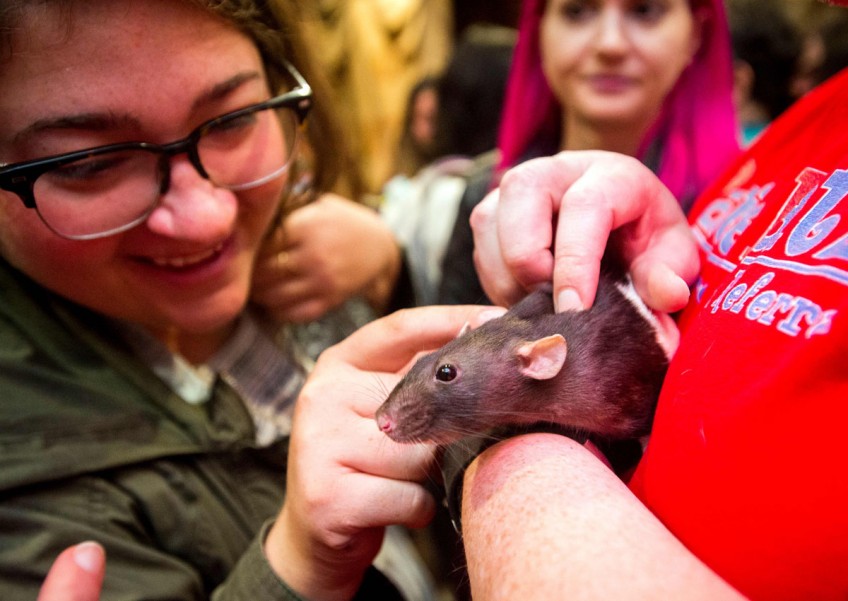 San Francisco - The rodent-borne bubonic plague may seem unappetizing, but for a few San Francisco visionaries, it proved just the inspiration needed to launch one of the city's latest eateries: The Rat Cafe.

The pop-up cafe, which opened Saturday, offers visitors a chance to munch on a breakfast of pastries, coffee and tea, and enjoy a bit of play time with a small handful of rats.

Hosted inside The San Francisco Dungeon, an immersive tourist attraction that takes visitors on a journey through the city's dark past from Alcatraz to the violence and greed of the Gold Rush, the $50 (S$69) breakfast was conceived after some employees began pondering the venue's section on a black death plague that struck in the early 20th century.

"We tell the story of the (bubonic) plague here in San Francisco and we really thought we wanted to do something special for the summer," said the Dungeon's Matthew Gunter.

"Let's bring the rats to life, let guests actually get a chance to get up close and personal with rats, of course plague-free rats," he said.

Several dozen people have shelled out the money to attend one of two breakfast sessions in which they get to interact with approximately six to eight rats and have breakfast. The venue says more breakfasts may be planned at a future date.

Krissi Reeves, a spokeswoman for the Dungeon, said tickets for the July 1 and 8 events sold out in less than an hour.

"The rats are pretty darn cute and the people who purchased tickets, I think they have already decided that they're gonna like the rats and not be too scared," she said.

The rats are provided by Rattie Ratz, a California non-profit that helps place pet rats in homes.

"They love to be petted, they're very affectionate. They're way more affectionate than any small animal I know," said the organisation's Jennifer Girgar.

The Rat Cafe opens amid a booming cat cafe trend in parts of Asia and even the United States and Europe, in which visitors sip beverages surrounded by felines which are often available for adoption.