I'm Muslim, will you hug me? 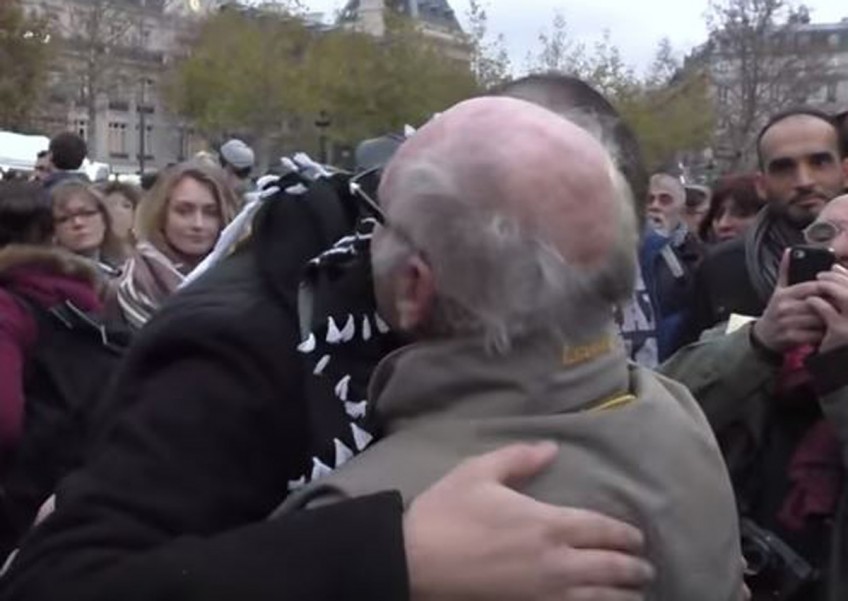 Even as France reels from one of the worst terror attacks in history, an unnamed Muslim man tried to calm nerves in his own, simple way.

His message went some way towards bringing a ray of hope to millions of French who are trying to come to terms with the tragedy.

As mourners gathered in Paris to honour victims killed by terrorists, the man stood among them and asked if they would embrace him.

After blindfolding himself, he positioned himself next to a placard which read: "I'm a Muslim, but I'm told that I'm a terrorist. I trust you, do you trust me? If yes, hug me."

Poignantly, he chose the Place de la Republique, the unofficial focal point for tributes and vigils.

It is a short distance from the sites of three of the shootings that killed 129 people last Friday.

He was not disappointed.

Dozens of tearful onlookers approached him one by one to give him a hug, Mail Online reported.

After taking off his blindfold, he said: 'I would like to thank every one of you for giving me a hug.

"I did this to send a message to everyone. I am a Muslim, but that doesn't make me a terrorist. I never killed anybody.

"I can even tell you that last Friday was my birthday, but I didn't go out."

He went on to say he felt deeply for the victims' families and that he wanted to tell the world that "Muslim" doesn't necessarily mean "terrorist".

He added: "A terrorist is a terrorist, someone willing to kill another human being over nothing.

"A Muslim would never do that.

"Our religion forbids it."

A video of the man has been viewed more than 10 million times on Facebook and "liked" nearly 150,000 times in just two days.

Meanwhile, Italy is looking for five terror suspects after a tip-off from the Federal Bureau of Investigation (FBI) about possible attacks on landmark sites, including St Peter's cathedral in the Vatican, Foreign Minister Paolo Gentiloni said yesterday.

"Since yesterday afternoon, our security forces have been working to find five people," Mr Gentiloni told the Raitre television station, reiterating that the country was already primed for the possibility of an attack on St Peter's or other historic monuments, such as La Scala theatre in Milan.

This article was first published on Nov 20, 2015.
Get The New Paper for more stories.