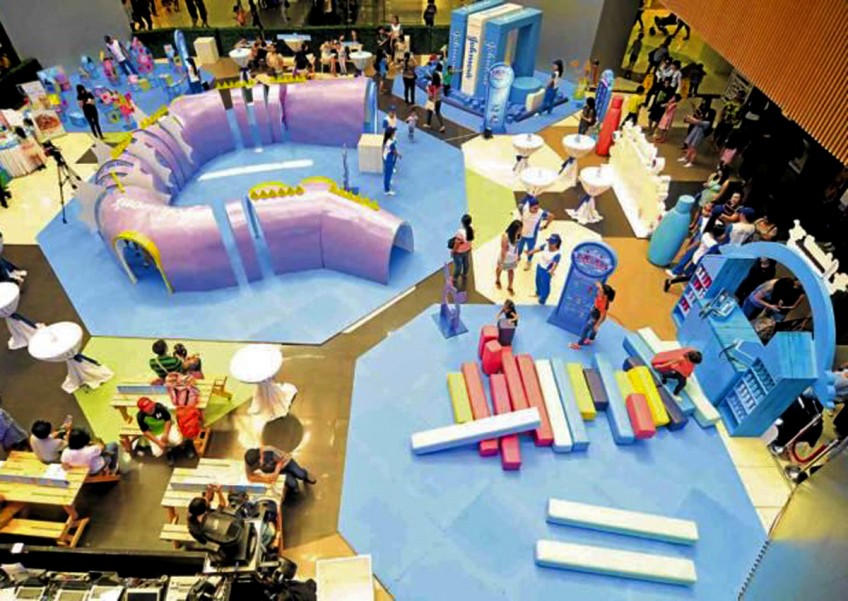 Johnson’s set up a play center in the main activity area of SM Southmall in Las Piñas.
Philippine Daily Inquirer/ANN

The effects of technology, inactivity and obesity on children have made playing outdoor games with their friends and even with parents a necessity.

Johnson's, a leading manufacturer of grooming and hygiene products for children, calls it "Playcation"-moments when kids are sweating it out in the field as they enjoy fun interactions without worries.

Recently Johnson's set up an impressive play centre in the main activity area of SM Southmall in Las Piñas-building four segments or areas that encouraged kiddie guests to jump, run, roll, crawl, think and, when all is done, eat.

Right in the middle was a slinky-shaped tunnel called "Dragon Maze" where children searched for hidden objects within a time frame.

In front of it is a "Little Builder's City" where children slid and rolled as they built fortresses using soft cushions.

"Fireball Away" featured cushioned pendulums that challenged children's agility and cognitive skills, while "Imagine and Seek" had rubber mats that allowed kids to use imagination and thinking skills to recreate images.

GMA 7 star Bettina Carlos and six-year-old daughter Amanda Lucia aka Gummy were on hand to banter with parents and children about the benefits of physical play.

Carlos said it was Gummy's athleticism that inspired her to enroll the young girl in gymnastics class. "Play is the most effective way to learn things because it allows interactions with other kids," Carlos observed.

When Gummy isn't out playing with friends, she enjoys more quiet moments drawing, painting or colouring on paper.

Carlos said she would hear Gummy make up stories using her toys as characters, even changing voices during these characters' "dialogue," as well as draw characters on paper.

Play allows children to learn social skills because they learn to interact harmoniously with others, Campillo pointed out.

Campillo's five-year-old daughter Adriana, for example, puts her love of the outdoors to good use by making lots of friends in their village.

While admitting the heavy presence of technology in children's lives, Campillo said this should not mean physical play should take a backseat. "You cannot exclude electronics but if you open up opportunities for kids, they still prefer active play," she explained.

She added that this necessity for balance makes it crucial for parents to join in and play with their kids: "It's just that our lives are getting much busier, I myself am guilty of that.

But play is important, we need to take time. Play allows me to bring Adriana and (older sister) Amara out of the house and away from the TV and the iPad."

Campillo said the four play areas built in SM Southmall would be turned over to Toy Library, a Quezon City-based nonprofit that distributes playground equipment in areas like Palawan, Camarines Sur and Rizal through local government units.

Toy Library's Michael Angelo Santiago welcomed the four interactive setups, noting that the group receives numerous requests from public schools and daycare centres for toys that do not involve electronic signals or plug-ins.

"Too much technology lessens kids' interaction with each other," said Santiago, who grew up playing basketball and board games with cousins in Quezon City. "We don't promote technology but interactive toys because imaginative play enhances imagination and creativity."

Playing with other children, he noted, also adds to a kid's emotional and social development: "Part of play is learning to put away the toys, so holistic ang development ng bata. Hindi lang nakatapat sa screen," Santiago said.