Inflight internet ready to take off 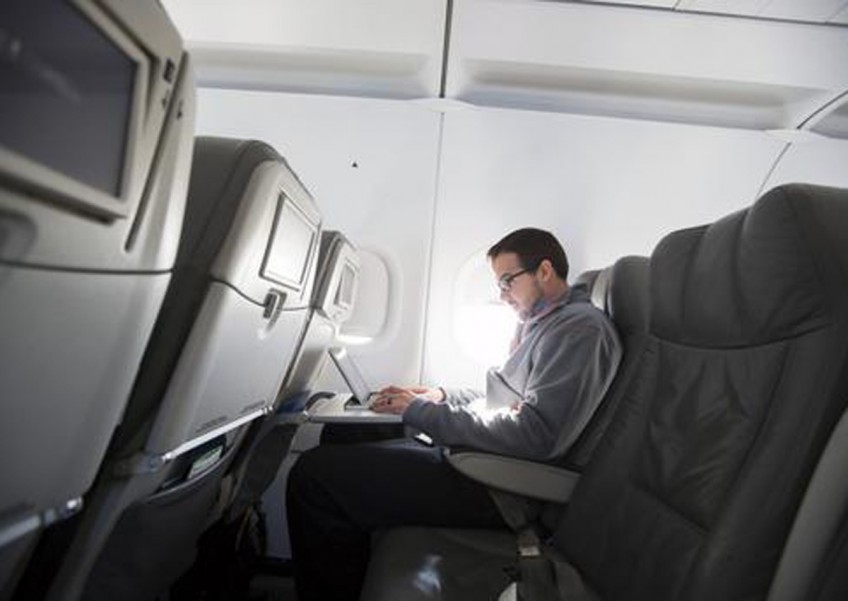 Inflight internet access, a nascent market still hobbled by slow speeds, is set to take off as dedicated satellites make surfing in the skies a reality, experts say.
Reuters

Even bans on bringing laptops and tablets on board imposed by Britain and the United States on flights departing from certain airports won't halt it, industry players and analysts gathered at the Paris Air Show believe.

"It is undeniably a trend. The main thing is to jump on the wave at the right moment," said Marc Rochet, chief executive of the low-cost airline French Blue, about the technology which is rapidly evolving but comes with a high price tag.

By 2021 more than 17,000 airliners - or nearly half the global fleet of commercial aircraft - will be equipped for inflight internet, according to a recent study by the Euroconsult firm.

The increase is being driven by a new generation of satellites that allow the use of smaller and lighter antennae on aircraft, as well as greater coverage by land-based systems.

This allows for higher data transmission speeds making the experience for users much as they get at home, and not the slow and spotty connections available so far.

It is a far cry from the early systems that began to be introduced around five years ago that allowed users to consult emails.

The United States was the pioneer in developing a network of ground antennae for inflight internet.

There, some 4,000 planes are equipped for inflight internet compared with just hundreds in Europe.

In 2016 new satellites capable of supporting video and television streaming, games and social media began to be deployed.

"The ability to support video streaming on a large scale shall be a game changer," said Euroconsult.

According to William Huot-Marchand, sales director at the inflight entertainment division at the aerospace firm Thales, there is also a generational change underway in airline passengers.

If previously most passengers accepted flights as a time to disconnect, younger generations, particularly millennials, don't appreciate the forced withdrawal from social media and online access.

Euroconsult estimates that revenues to suppliers for providing inflight internet connectivity topped $1 billion (S$1.4 billion) in 2016 and should reach $6.5 billion by 2026.

But the investment isn't negligible, with the cost of equipping each plane running up to half a million euros.

The airlines which have taken the plunge are using different pricing models.

Some offer inflight internet as a free perk.

Others charge by the hour, flight, or even offer longer subscriptions as a way to recoup their costs and avoid overloading the available bandwidth.

With passengers being in effect being a captive audience, some airlines are considering how to use it as a means to boost onboard sales.

It can also help reduce losses, helping airlines to recoup their investments.

"Today there are fraudulent transactions onboard" as card transactions for inflight sales are not verified, said Sebastien Maire, an aeronautics expert at the Olivier Wyman consultancy.

Security is another worry for airlines and equipment manufacturers who want to make sure inflight internet access isn't used as a means to mount a cyber attack on an aircraft.

"The issue of cybersecurity is at the centre of our preoccupations. Every day there are new threats and every day you have to anticipate them," Huot-Marchand at Thales, one of the leading global firms in cybersecurity, said.

Even if the United States and other nations broaden a ban to bringing laptops and tablets, the widespread use of smartphones by consumers to watch videos, write emails and use social networks mean that there will still be growing demand for internet connectivity.

"And while the recent US and UK bans of personal electronic devices on certain flights might impact dynamics if extended, we believe that aero connectivity is poised for structural growth," Euroconsult chief executive Pacome Revillon said recently.