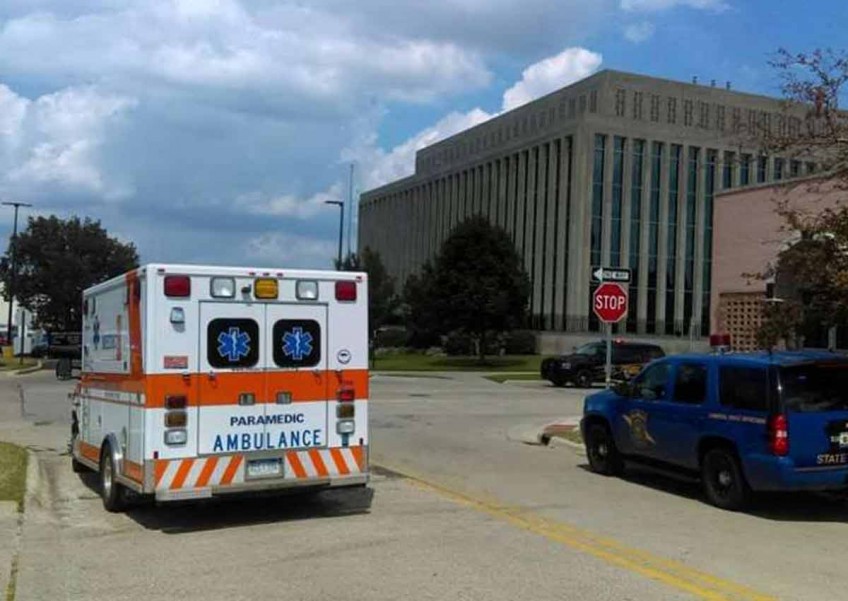 A US inmate at a Michigan courthouse shot and killed two court officers and wounded a sheriff's deputy Monday during a struggle to escape before responding officers returned fire and killed him, officials said.

The sheriff's deputy and a civilian, who was shot in the arm at the Berrien County Courthouse, were taken to a hospital where they are in stable condition, Sheriff Paul Bailey said.

The bodies of the victims were still inside the courthouse building, as investigators pieced together what happened.

Officials planned to release the victims' names after all family members were notified.

"I lost some friends today, so I'm here with a heavy heart," Bailey told reporters, describing the officers killed as longtime law enforcement officials who had been bailiffs for the last 10 years.

"Our hearts are torn apart," he said, "They were our friends. They were our colleagues." Investigators were interviewing witnesses on the third floor of the courthouse where the shooting took place.

"An inmate was trying to be moved from a cell by a deputy and a bailiff," Bailey said, when a fight occurred in the corridor between the holding cell and the courtroom.

"That inmate was able to disarm one of the officers," he said. "We are still investigating to find out what officer." The courthouse will be closed the rest of Monday and on Tuesday.

The shooting came amid jitters across the United States following the killing of five police officers in Dallas last week by an Army veteran upset about the fatal police shootings of two black men in Louisiana and Minnesota.

Responding to the shooting in Michigan, Governor Rick Snyder asked for support for law enforcement.

"This is a particularly tough time for law enforcement, so I ask that everyone reach out (to police officers)," Snyder said. "We need to rally together, to support one another."