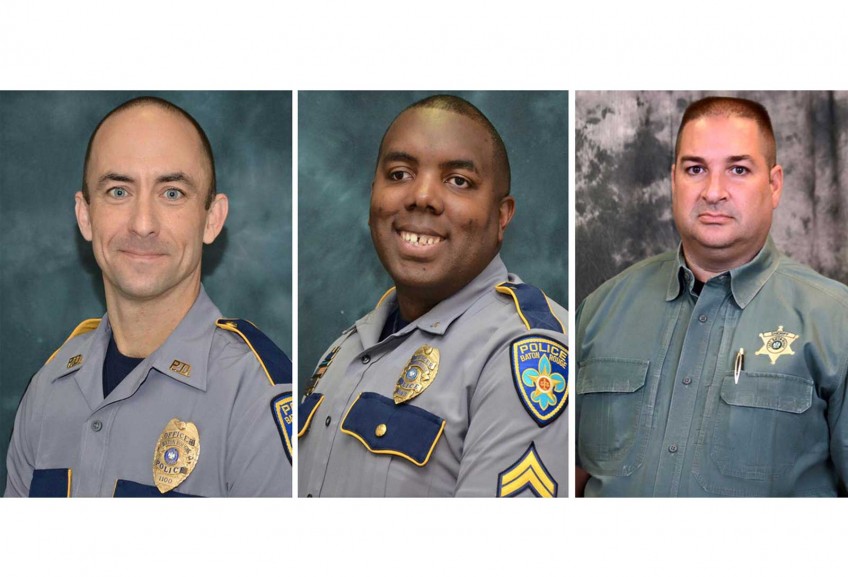 One of the three police officers killed by a gunman in Baton Rouge, Louisiana, was a military veteran who served three tours in Iraq. Another had a son who turned four months old on Monday.

Law enforcement officials provided new details on Monday about the six officers who were slain or wounded during an ambush a day earlier, including a sheriff's deputy fighting for his life after being shot in the head and stomach.

Following are updates on the officers who Louisiana State Police Superintendent Colonel Mike Edmonson said were"intentionally targeted" by the gunman. A 41-year-old Baton Rouge police officer who has been on the force for nine years and suffered non-life-threatening injuries has not been named.

Baton Rouge Police Officer Matthew Gerald, 41, was a veteran of both the US Marines and the US Army, serving as a member of a Black Hawk helicopter crew and doing three tours in Iraq, Police Chief Carl Dabadie told a news conference.

He had been on the local police force for less than a year, but "he spent his whole life serving this country," Dabadie said. "He's a hero for everything he's done," he added.

Gerald was a married father of two children.

Montrell Jackson, 32, served as a Baton Rouge police officer for a decade. Dabadie was his instructor at the police academy. "Montrell stood tall every day," the chief said.

"He never wavered. He never quit. His heart was in service for this community." A few days before the Sunday shooting, the police chief said he visited some officers to lift their spirits after many days of protests in the city. Jackson "ended up giving me a pep talk," the chief said.

An emotional Dabadie read a statement from the officer's wife, with whom Jackson had an infant son who turned four months old on Monday. "Montrell was my everything," she said. "He loved his family and he loved his fellow officers. I know without a shadow of a doubt he loved his job, and he loved his city. Knowing this gives me a little peace and comfort."

"My deputy went down fighting," the sheriff said. "He returned fire until the very end." Garafola, who had been employed by the sheriff's office for 24 years, left behind a wife and four children.

"I know they are hurting, but I want them to know that we are here for them now and forever," Gautreaux said. "They are our family."

Sheriff's Deputy Nicholas Tullier, 41, is in "very critical condition" and is on a ventilator after suffering extensive damage from gunshot wounds to his head and stomach, Gautreaux said.

Tullier has served with the East Baton Rouge Sheriff's Office for 18 years. "We're just praying for him," the sheriff said. "He's not in good shape at all."

Simmons was headed on Monday night for his second surgery since the attack, Gautreaux said. He has already had a titanium rod inserted into his shattered arm and faces several more reconstructive surgeries.

Simmons has 23 years of service for the sheriff's office.