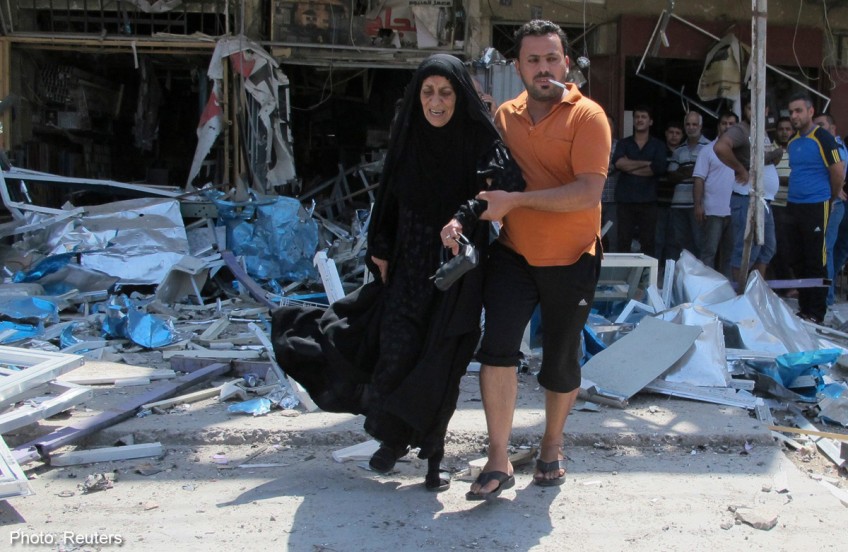 A man helps a woman, whose son was killed in a car bomb attack, as they walk away from the scene of the attack in Baghdad.

BAGHDAD - The Islamic State group has claimed responsibility for a wave of car bombs in mostly Shi'ite areas of Baghdad which killed at least 27 people on Saturday.

The hardline Sunni Islamist organisation which has led an offensive across northern and western Iraq said two of the explosions were suicide missions by bombers it named as Abu al-Qaaqaa al-Almaani and Abu Abdul Rahman al-Shami - noms de guerre which suggested they were from Germany and Syria.

Saturday's blasts were the deadliest in the Iraqi capital since the Sunni insurgency erupted in the northern city of Mosul and then swept through Sunni regions of Iraq towards Baghdad.

The first suicide bombing took place at a checkpoint where soldiers, police and Shi'ite volunteer fighters were gathered, the Islamic State said in an Internet statement. The other struck in Kadhimiya, the site of a major Shi'ite shrine.

At the same time two car bombs were set off in the west of the capital. "The toll of these blessed operations was the killing and wounding of 150 people," the statement said, warning of greater attacks to come.