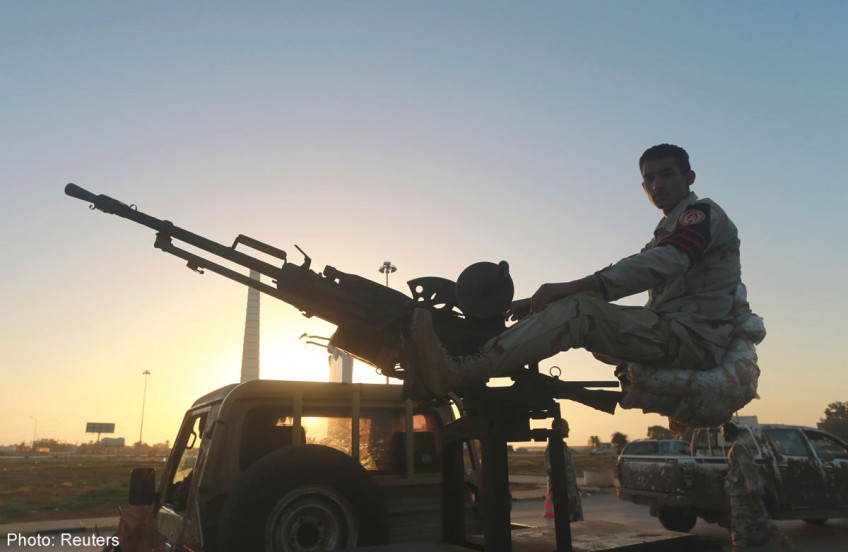 A Libyan military personnel mans a checkpoint in the city center in Benghazi December 4, 2014, where clashes between pro and anti-government forces have taken place.

BENGHAZI, Libya - Supporters of Islamic State, the militant group that has overrun parts of Iraq and Syria, have killed 14 Libyan soldiers in the south of the country, the official government said on Saturday.

In separate violence, forces loyal to the internationally recognised government staged air strikes on the port of Misrata, a western city allied to a group that holds the capital Tripoli.

Both sides also fought with ground troops near the country's biggest oil port, part of a struggle between forces loyal to two rival governments allied to former rebel groups that helped oust Muammar Gaddafi in 2011 but now vie for power.

Western powers and Libya's neighbours fear Islamic State and other radical Islamists are seeking to exploit a power vacuum in the oil-producing nation.

The recognised government of Prime Minister Abdullah al-Thinni, which has been forced to work from the east since a group known as Libya Dawn linked to Misrata seized Tripoli last August, said Islamic State had executed 14 soldiers on a road north of Sabha, the main city in the south.

"Members of IS staged an attack... during which they executed 14 members of the Libyan army belonging to the infantry battalion 168," the government said in a statement, asking the international community to lift an arms embargo to help fight what it called terrorists.

A website called Islamic State in Libya claimed responsibility for killing 12 soldiers at the same location and posted a picture purporting to show the execution of one soldier.

There have been attempts by Islamic State to open a branch in Libya at Derna, an eastern hot spot for radical Islamists. The US military is monitoring a nascent effort by Islamic State to train a couple of hundred fighters in eastern Libya, the commander of US forces in Africa said last month.

Thinni has accused the Tripoli government of relying on Islamists. It denies this and says Thinni is backed by former Gaddafi officers.

A state news agency loyal to the Tripoli government said two people had been wounded when several rockets hit a port building in the city located 200 km (125 miles) east of Tripoli.

Separately, troops loyal to Thinni said they had attacked a rival force which three weeks ago tried to seize the Es Sider oil port. Es Sider and the adjacent Ras Lanuf oil ports have been closed since the clashes started.