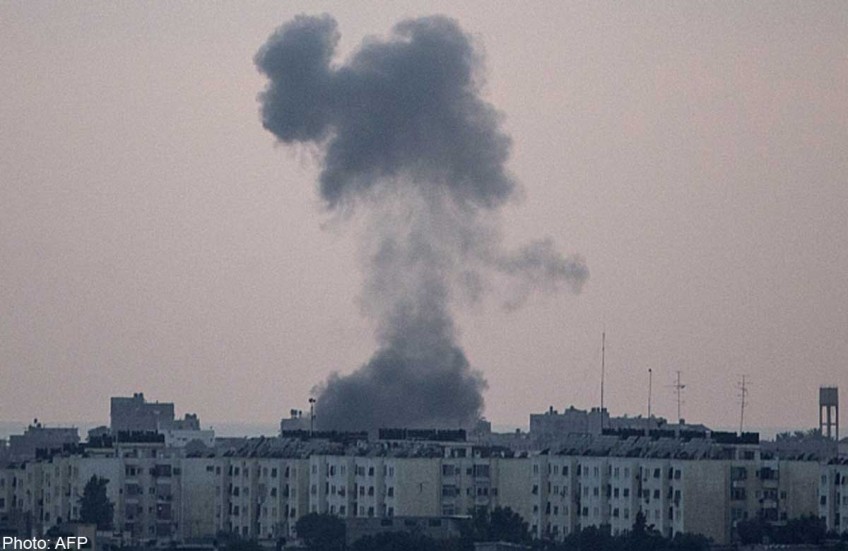 A picture taken from the southern Israeli city of Sderot shows smoke billowing from the Gaza Strip following an Israeli air strike on July 15, 2014. Israeli warplanes bombed the house of senior Hamas leader Mahmoud al-Zahar on Wednesday, security officials said, on day nine of an operation against militants in the besieged Palestinian territory.

There was no one in the house, in western Gaza City, at the time the air strike hit, the security sources and witnesses said, adding that the homes of other Hamas officials were targeted in separate raids.

Israeli strikes also hit the home in western Gaza City of Mr Bassem Naim, a senior Hamas official, and those of former health minister Fathi Hammad and Hamas MP Ismail al-Ashqar, both in Jabalia in the north.

The strikes came after hopes of a Tuesday ceasefire were dashed, with Hamas rejecting the Egypt-proposed truce and Israel, which had suspended its aerial campaign for a few hours, resuming its bombardment in the afternoon.

The conflict, entering its ninth day on Wednesday, has killed 197 Palestinians and one Israeli, who died late Tuesday from a rocket attack by Gaza militants near the Erez border crossing. - See more at: http://sph.straitstimes.com/news/world/middle-east/story/israel-air-raid-targets-senior-hamas-leaders-home-officials-20140716#sthash.NWaxkYJj.dpuf