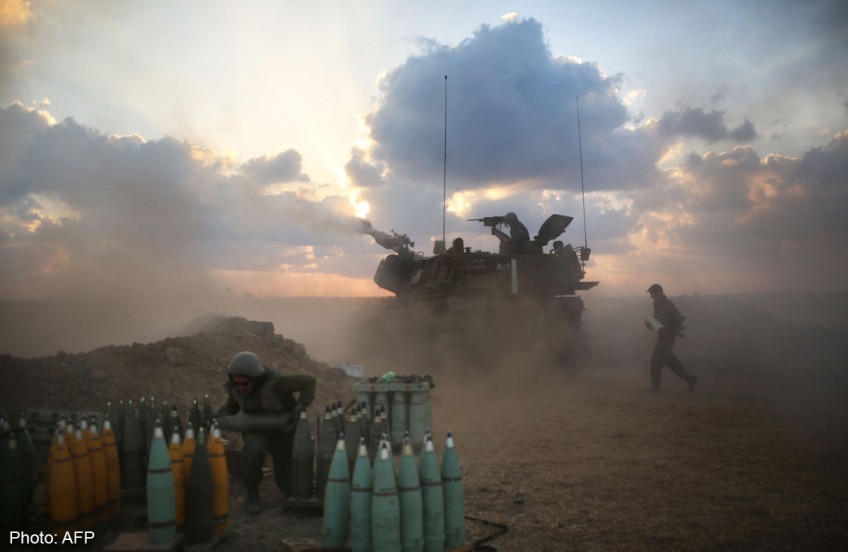 Israeli soldiers of the 155mm artillery canons unit fire towards the Gaza Strip from their position near Israel's border with the coastal Palestinian enclave, on July 19.

JERUSALEM - Israel's army said Sunday it was expanding its ground offensive against the Gaza Strip, as the bloodiest conflict since 2009 entered its 13th day with a death toll of over 360.

"This evening, the ground phase of Operation Protective Edge expands, as additional forces join the effort to combat terror in the Gaza Strip and establish a reality in which Israeli residents can live in safety and security," the army said in a statement.

The army began the ground offensive late Thursday, after 10 days of aerial and naval bombardment of the besieged Palestinian territory, in a bid to stamp out rocket fire from Gaza militants.

Army Chief-of-Staff Lieutenant General Benny Gantz warned Friday that as Israel expanded the ground operation there would be "moments of hardship," alluding to the possibility of further Israeli casualties.

Shortly after the military's announcement, an army statement said two more soldiers had been killed late Saturday, naming them as Bar Rahav, 21, and Bnaya Rubel, 20.

Since the ground operation began, five Israeli soldiers have been killed, including two in a firefight with Hamas militants inside Israeli territory.

The operation has so far killed 357 Palestinians and seven Israelis.

The army says 190 rockets have hit Israel since the ground phase began, out of a total of 1,333 since July 8. Of those, 63 and 360 have been intercepted, respectively.