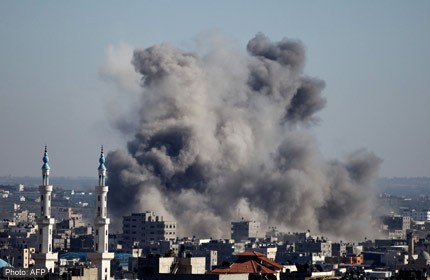 GAZA CITY, Palestinian Territories - Israel said Tuesday it would weigh an Egyptian truce proposal for Gaza, which has US backing, but Hamas appeared to reject the bid, as the death toll in the week-long conflict rose to 186 Palestinians.

The truce proposal came as Egyptian state media reported that US Secretary of State John Kerry was due in Cairo to discuss an end to the hostilities, and after Washington warned Israel against a ground invasion of Gaza.

US President Barack Obama welcomed the Egyptian initiative and described the deaths of Palestinian civilians as a "tragedy" while reiterating that Israel has the right to defend itself against Hamas rocket attacks.

"We are encouraged that Egypt has made a proposal to accomplish this goal that we hope can restore the calm that we are seeking," Obama said at an Iftar dinner marking the Muslim Holy month of Ramadan in the White House.

"The pictures that we are seeing in Gaza and in Israel are heart-wrenching," he added.

Israel's Operation Protective Edge, intended to stamp out militant rocket fire, had killed 186 people in Gaza by late Monday - exceeding the toll in the last similar flare-up of violence in 2012.

Late Monday, Cairo announced a proposal for a ceasefire that would begin Tuesday, saying it was willing to host high-level Israeli and Palestinian delegations for talks after a truce went into effect.

"0600 GMT has been set for the beginning of the implementation of truce arrangements between the two sides," the text of the Egyptian proposal, released late Monday, said.

But that deadline was likely to be delayed, with Israel saying its security cabinet would meet on Tuesday morning to weigh the proposal.

And Hamas appeared to reject the idea, with spokesman Fawzi Barhum saying the group would not accept a truce without a fully-fledged deal to end hostilities.

"In times of war, you don't cease fire and then negotiate," he told AFP.

He said Hamas had not received any official proposal, and that even an Israeli cessation of hostilities "on one side" would have "no value" after the damage it has wreaked in Gaza.

Hamas' armed wing Ezzedine al-Qassam Brigades rejected the truce proposal as "surrender", saying "our battle with the enemy will intensify." The Arab League early Tuesday came out in support of the Egyptian initiative calling on "all parties" to accept the truce and also backed a Palestinian demand for "international protection".

Among the issues to be discussed in any truce deal is the easing of the flow of goods into Gaza, which has been subject to an Israeli blockade for years.

Hamas has said it wants Israel's blockade on Gaza lifted, along with the opening of the Rafah border crossing with Egypt in any truce deal.

It also wants Israel to release Palestinians it rearrested after freeing them in exchange for kidnapped Israeli soldier Gilad Shalit.

Washington on Monday warned its Israeli ally against a ground invasion of Gaza.

It stopped short of criticising Israel over the civilian casualty toll from its devastating week-long air and artillery bombardment of the densely populated Palestinian enclave.

The spiralling toll has drawn flak however from the United Nations and rights watchdogs.

Washington said even more civilians would be put at risk were Israeli Prime Minister Benjamin Netanyahu to heed hardliners in his governing coalition and send in troops and armour.

"Nobody wants to see a ground invasion because that would put more civilians at risk," White House spokesman Josh Earnest said.

It was the first time that the White House has specifically warned in a public forum against an Israeli invasion of Gaza.

With Israel's punishing air campaign in its seventh day, the death toll in Gaza hit 186, higher than the 177 people killed in the last major round of violence in and around Gaza in November 2012.

Human rights groups say more than 75 per cent of the dead have been non-combatants. The UN agency for Palestinian refugees says more than a quarter of them have been children.

The raids have prompted some 17,000 people to flee their homes, particularly in northern Gaza, with many taking refuge in UN schools.

Sixteen people were killed in strikes on Monday, far fewer than the 56 killed on Saturday, the bloodiest day by far of a campaign which began before dawn on July 8 with the aim of halting militant rocket fire on southern Israel.

So far, no Israelis have been killed. Four have been seriously wounded.

Rocket fire from Gaza militants has since intensified, with Hamas militants launching more than 800 rockets at cities across Israel, including Jerusalem, Tel Aviv and the northern city of Hadera.

A further 187 have been shot down by Israel's missile defences.

In the early hours of Tuesday, two rockets fired from Gaza landed in Israel's southern port city Eilat, and another landed just outside the city, the army said.