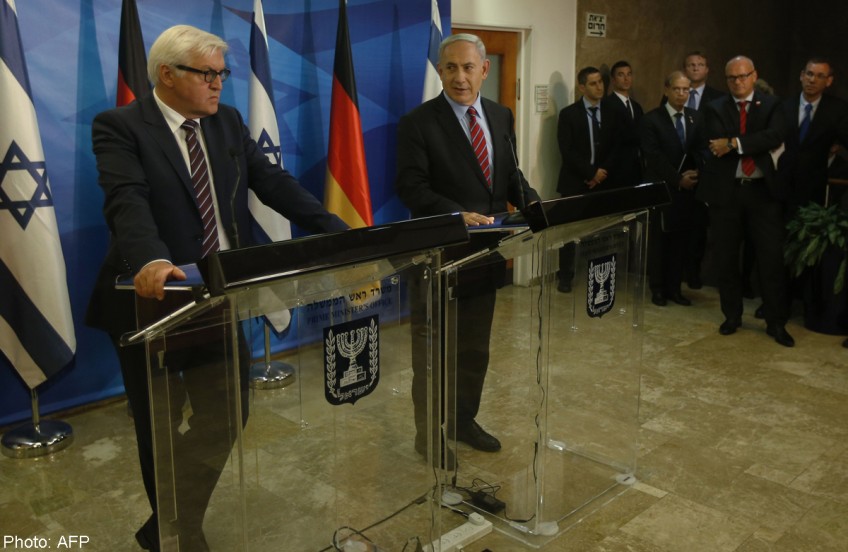 "One thing should be clear: we will never accept the definition of building in Jewish neighbourhoods of Jerusalem as settlement activity," he said at a news conference with his German counterpart Frank-Walter Steinmeier.

"We won't accept any limitation on building in Jewish areas of (east) Jerusalem," he said.

His remarks came four days after Israel approved plans to build 200 homes in Ramot in annexed east Jerusalem despite months of almost daily clashes and tensions there with Palestinians, triggered in part by settlement expansion.

The announcement prompted a sharply worded rebuke from Washington which reiterated its "unequivocal" opposition to such construction in east Jerusalem, warning it could "exacerbate this difficult situation on the ground and... will not contribute to efforts to reduce the tension".

Sources close to Steinmeier said Israel's ongoing settlement was a central theme in their talks, which also touched on the need to resume negotiations with Palestinians to end the conflict.

At a meeting with Israeli President Reuven Rivlin later Sunday, Steinmeier expressed his "hope" peace talks would be renewed, while warning against unilateral measures by both sides.

"Unilateral decisions pose an obstacle to the success of negotiations," he said in remarks relayed by Rivlin's office.

Steinmeier later said tripartite talks in Amman on Thursday between Israel, Jordan and the US had made the situation in Jerusalem "much more calm now", after violence had given the impression that "the really difficult political conflict is turning into religious dimensions".

"Peace is possible only if there are compromises on all sides and not unilateral actions and unilateral advantages that accrue to the Palestinian side, which is in fact engaged in continuing incitement," he said before meeting Steinmeier.

Israel seized east Jerusalem during the 1967 Six-Day War and later annexed it in a move never recognised by the international community.

It refers to the entire city as its "united, undivided capital", and does not view construction there as settlement activity.

The Palestinians want the city's eastern sector as capital of their promised state and vehemently oppose any Israeli attempt to expand construction there.