Israeli girl 'out of danger' after likely 'terror' attack 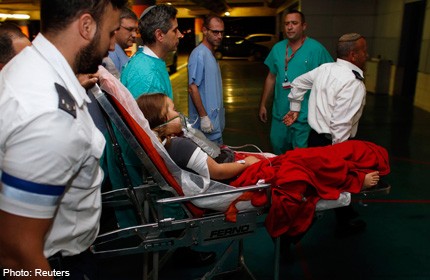 JERUSALEM - A nine-year-old Israeli girl was out of danger in hospital Sunday after being wounded in what police said was a probable terrorist attack in a West Bank settlement.

Police said they were not ruling out the possibility of other motives for what was variously described as a shooting or a stabbing as the girl played in her garden in the Psagot settlement near Ramallah.

"It seems to be a case of a terrorist attack, although at this stage no leads have been ruled out," police spokeswoman Luba Samri told AFP.

Police had initially said that Noam Blick was in a serious condition after being "shot in the upper part of her body".

But medics at the Jerusalem hospital where she was being treated said on Sunday that her condition was improving.

"Noam has been hospitalised in the intensive care service for children, but she is out of danger, conscious and her state is stable on Sunday morning," hospital spokeswoman Shaare Zedek told AFP.

A volunteer from Israel's Magen David Adom emergency services who treated Blick at the scene said that girl had seen an armed man before the attack.

"A man with his face hidden by a hood and carrying a weapon shot at me," Blick told the volunteer.

But Israeli media reported on Sunday that doctors treating Blick were unsure that she had been shot, suggesting her shoulder wound could have been caused by a knife.

The army said it was investigating the attack, and had recovered a weapon from nearby.

"The fence surrounding the settlement was cut and an improvised weapon was found on the scene," an army statement said.

"Security forces are continuing their search in the area to find the suspect, who escaped."

Last month, an Israeli soldier was shot dead in the southern West Bank city of Hebron, in what the army believes was a Palestinian sniper attack, although no suspects have been arrested.