Italy 'ghost ship' migrants paid up to $10,700 each to traffickers 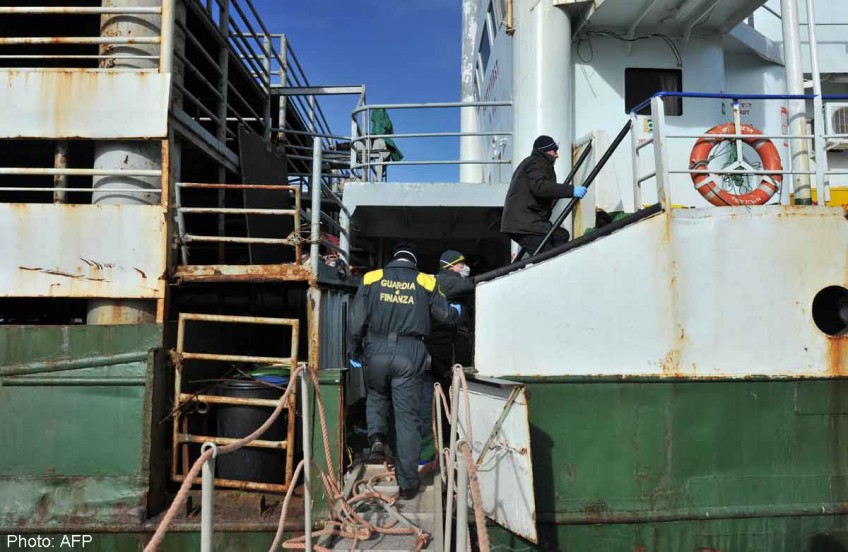 CORIGLIANO, Italy - Italian authorities disembarked 360 cold and hungry migrants Saturday from a ship left adrift by its crew off the country's coast, with some having paid up to US$8,000 (S$10,700) to traffickers for the perilous journey.

It was the latest in a wave of such incidents involving migrants crossing the Mediterranean to flee conflict and poverty in the Middle East and Africa and attempting to reach Europe by sea.

The migrants have been preyed upon by people smugglers, who have recently resorted to a new tactic of abandoning "ghost ships" full of desperate travellers off European coasts.

Women and children were among hundreds of migrants left stranded aboard the Ezadeen, which docked in the Italian port of Corigliano Calabro around 11 pm Friday after a delicate operation by the Italian navy to take control of the ageing vessel.

Its arrival was one in a series of maritime dramas that Italy has grappled with in recent days, and which have brought some 2,000 rescued migrants to Italian soil.

Italian prefect Gianfranco Tomao told reporters migrants can now pay traffickers between US$4,000 and US$8,000 for passage to Europe.

Passengers aboard the Ezadeen had paid amounts in that range, he said, and the ship was later left to drift in stormy seas off southern Italy without fuel or electricity.

Some confusion remained about whether the vessel's crew jumped ship, or as some passengers suspect, simply peeled off masks they'd worn during the crossing, then melted in among migrant passengers to be rescued as naval ships neared.

Most of the 232 men, 54 women and 74 children aboard are thought to be Syrians fleeing war in their homeland. They were all said to be in good health.

Six coastguard officers were lowered from a helicopter onto the deck of the Sierra Leone-flagged vessel on Friday to set up a tow for the 40km to the Italian coast.

"We are alone, there is no one, help us!" Marini quoted her as saying.

Icelandic patrol boat Tyr, which was in the area on a mission with the European Union's border agency Frontex, came to the rescue, but rough weather conditions made boarding the ship impossible.

After the Ezadeen ran out of fuel, five Tyr crew members were winched onto the ship by helicopter to care for passengers until the Italian coastguard arrived.

"The migrants aboard were visibly distressed but overall in good medical condition. They have been provided with food, water and basic medical assistance," a Frontex statement said Friday.

The incident marked the third sea rescue operation Italy's navy has been forced to mount in a week.

The first arose after a deadly fire broke out on the Norman Atlantic ferry Sunday between Greece and Italy.

Italian prosecutors fear the Norman Atlantic, which was towed to the port of Brindisi Friday, could contain the bodies of illegal immigrants and unregistered passengers yet to be discovered.

Bari prosecutor Giuseppe Volpe said almost 500 people may have been aboard - far above the 474 officially on the manifest - prompting fears the current death toll of 13 may rise once the ferry is fully searched.

Ettore Cardinali, the magistrate leading the investigative portion of Volpe's case, told reporters Saturday that his first search of the Norman Atlantic had turned up no additional victims.

However, when he first entered the ferry to recover its "black box" data recorder Friday, Cardinali noted important sections of the vessel remain inaccessible due to safety concerns, and that it would take time for a complete sweep of the ship to determine whether any other victims were trapped in it.

Three days after the ferry fire, the Italian navy stopped its first crewless "ghost" ship of the week, which had been left drifting with around 770 migrants on board.

The Blue Sky M freighter was on autopilot, after having been abandoned by the people smugglers who had sailed it from Turkey.

The Moldovan-registered Blue Sky M got within five miles of running aground before six navy officers were lowered on to the ship by helicopter and succeeded in bringing it under control.

Some of the migrants were treated for hypothermia and injuries, including broken limbs.

More than 170,000 people have been rescued at sea by Italy in the last 14 months, and hundreds, possibly thousands, have perished trying to make the crossing.

The International Organisation for Migration estimated Friday that people smugglers grossed over US$1 million (830,000 euros) on just one of this week's abandoned ships alone.