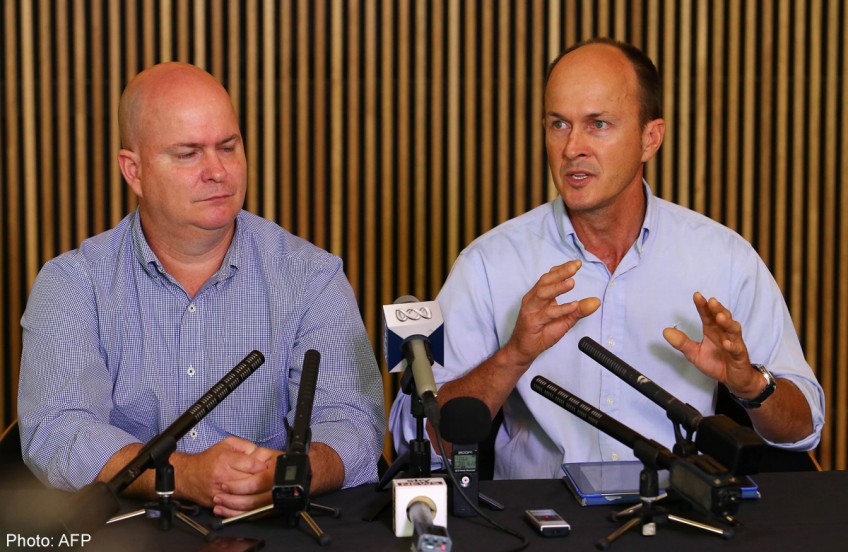 The brothers of jailed Australian journalist Peter Greste, Mike (L) and Andrew Greste (R), speak to the media during a press conference in Brisbane on January 2, 2015.

SYDNEY - The lawyer for jailed Al Jazeera journalist Peter Greste has formally applied to the Egyptian government for the Australian's deportation, his family said on Friday, after Egypt's highest court ordered a retrial for Greste and two colleagues.

Greste, Canadian-Egyptian Mohamed Fahmy and Egyptian national Baher Mohamed were sentenced a year ago to seven to 10 years on charges including spreading lies to helping a"terrorist organisation" - a reference to the outlawed Muslim Brotherhood.

The High Court in Cairo ordered the retrial on Thursday on the grounds of procedural flaws in the trial, defence lawyers said on Thursday.

The original trial had been condemned by human rights groups and Western governments and prompted the United Nations to question Egypt's judicial independence.

The reporters' imprisonment has been a thorny issue for Egyptian President Abdel Fattah al-Sisi as he seeks to prove his commitment to democratic reforms.

"Now that Peter is essentially an innocent man, he's not convicted any more, it does allow for some room to move and for him (Sisi) to step in ... and deport him," Greste's brother Andrew told reporters in Brisbane.

Defence attorneys said earlier in Cairo that new proceedings could begin within a month.

Despite the widespread criticism of the case, Sisi has cited the independence of the judiciary. However, he said in November he would have preferred to have deported Greste had he been in power when the journalists were arrested in December 2013.

Australian Foreign Minister Julie Bishop said the law in Egypt had change since Greste and his colleagues were arrested.

"There are more avenues, more options for Peter Greste, his family and his legal team to pursue," she said.

Andrew Greste said the family was hopeful but said new laws had not yet been tested.

The journalists have maintained they were simply reporting the news. Qatar-based Al Jazeera reiterated that position on Thursday.

Andrew Greste said the family had not yet spoken to his brother, who did not appear in court on Thursday. Peter Greste remains in Cairo's tough Tora prison, where the three men have been held for more than a year.