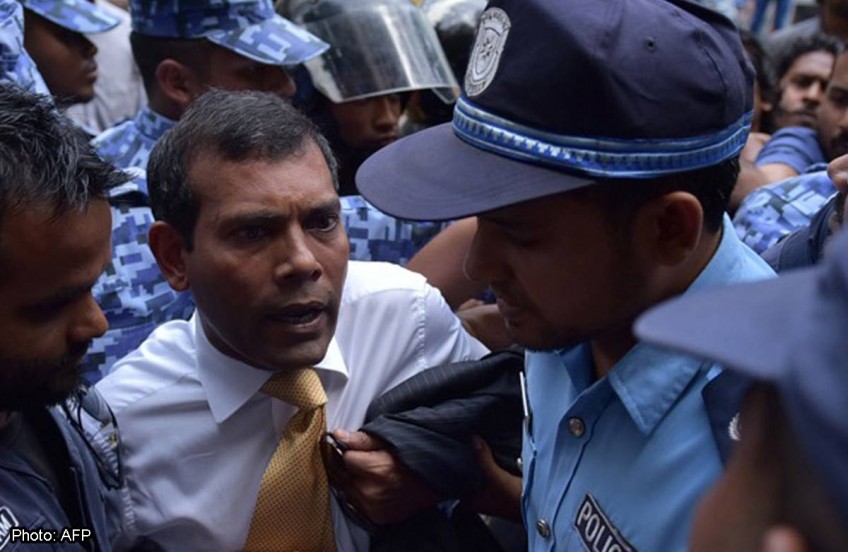 Maldives police surround former president Mohamed Nasheed (C) as he arrives at a courthouse in Male on February 23, 2015.

Nasheed's spokesman said the honeymoon islands' first democratically elected president has been denied a copy of the trial proceedings which he needs to lodge an appeal.

"The criminal court has tried to block the appeal at every step of the way," his spokesman Hamid Abdul Ghafoor told AFP in Colombo. "It is not that he does not want to appeal, but he is not being allowed to file his papers."

The Maldives government has resisted international pressure to release Nasheed, jailed this month for ordering the arrest of a chief judge in 2012 when he was president.

Western countries, India and the UN's human rights chief have expressed concern over "flagrant irregularities" in his trial, while his lawyers have said the case was aimed at destroying his political career.

The Maldivian High Commission in Colombo denied Nasheed has been stopped from lodging the appeal, saying he has refused to sign a copy of the case file, thereby preventing it from being finalised.

But Ghafoor said Nasheed refused to sign the report because it contained testimony that he never made and included witness accounts which were not presented in court.

"How can president Nasheed sign off on something that he never said?" Ghafoor asked. "This is a mockery of justice." The decision to prosecute Nasheed under terror laws has made his conviction particularly controversial and sparked a series of protests.

The opposition has held night-time rallies over the past year to protest what they call growing authoritarianism, which has damaged the atoll nation's image as a tourist paradise.

Maldives Attorney General Mohamed Anil told reporters in Colombo last week his country's judicial system was not up to international standards, but insisted that "due process" in the case had been followed.