An Indian airline has given its youngest customer the ultimate birthday present.

Jet Airways on Sunday said it awarded a free lifetime travel pass to a baby boy born during a flight from Dammam, Saudi Arabia, to Kochi in southwest India.

The boy is the first baby to be born in-flight for Jet Airways, a spokesperson confirmed by email.

Pilots diverted flight 9W 569 to Mumbai on Sunday after a passenger went into premature labour during what would've been a five-hour flight.

The airline's crew members, along with a trained paramedic who was travelling that day, provided immediate medical assistance.

"The guest delivered a baby boy at 35,000 feet," the spokesperson said.

"Upon landing, both mother and the baby were rushed to Holy Spirit Hospital in Mumbai and are doing well."

Jet Airways later informed the woman's family, who were en route from Kochi (also known as Cochin) by late Sunday.

The Boeing 737 carried 162 guests and six crew members during the flight.

The Kochi-bound baby isn't the first child to be born high in the sky this year. In April, a woman on a Turkish Airlines flight gave birth to a girl at 42,000 feet in the air. 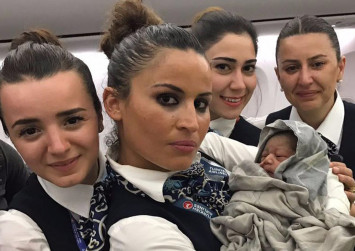 Nafi Diaby, who was 28 weeks pregnant, went into labour shortly after takeoff from Guinea's capital of Conakry.

Crew and passengers stepped in to help safely deliver the baby, and the plane made an emergency landing in Ouagadougou, the capital of Burkina Faso.

With a bit of preparation, airline travel is considered safe for most pregnant women, according to the US Centres for Disease Control and Prevention.

For instance, doctors might recommend women wear compression stockings or do in-seat leg exercises to reduce the risk of blood clots.