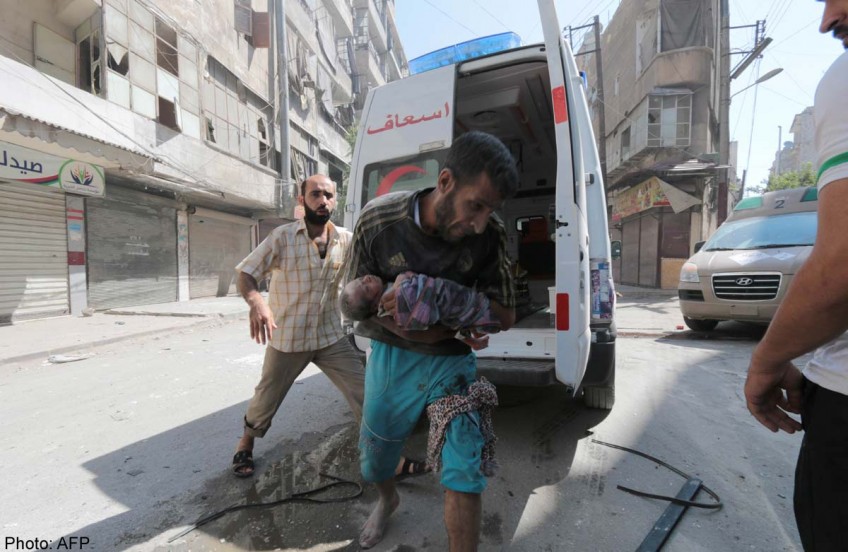 A man carries a baby as he rushes from an ambulance in the eastern Shaar neighborhood of the city of Aleppo, on July 9, 2014, after four barrel bombs were reportedly dropped by the Syrian airforce, damaging homes and shops.

The Syrian Observatory for Human Rights described Thursday's takeover of the Shaar field as "the biggest" anti-regime operation by the Islamic State (IS) since it emerged in Syria's conflict last year.

The watchdog said it had documented "the death of 270 people killed in the fighting or executed" since the takeover of the field in central Syria.

"A large majority of the men killed were executed at gunpoint after being taken prisoner following the takeover of the camp," said Observatory director Rami Abdel Rahman.

"Eleven of the dead were civilian employees, while the rest were security guards and National Defence Forces members," he added.

On Saturday, regime forces, a day after launching a counter-attack, had "re-taken large areas of Shaar", according to Abdel Rahman.

"Fighting is continuing around the gas field".

The counter-attack had left at least 40 IS militants dead, while 11 soldiers had been killed and 10 others who were injured had been taken to hospital in Homs.

The fate of nearly 100 people who worked at the site remained unknown, according to earlier figures released by the Observatory.

The Syrian government did not officially confirm the deaths, but supporters of President Bashar al-Assad's regime posted photographs of the dead.

He also branded the killings as a "massacre", and posted pictures of the dead.

Gruesome footage apparently recorded by the jihadists at the gas field and distributed via YouTube showed dozens of bodies, some of them mutilated, strewn across a desert landscape.

One video shows a jihadist posing with the bodies as he speaks in German interspersed with religious terms in Arabic, seemingly celebrating the killings.

Deir Ezzor borders Homs province as well as Iraq, where the jihadist group has spearheaded a major Sunni militant offensive that has seen large swathes of territory fall out of the Baghdad government's control.

On Thursday, the jihadists stoned a young woman to death for adultery in the southern province of Raga, the Observatory said, in the first "execution" of its kind by the IS.

"The victim was a 26-year-old widow," Abdel Ramane said.

According to a local activist, who said the public stoning took place in a square in the town of Tabqa, the people are "terrified but do not dare react to such barbaric methods".