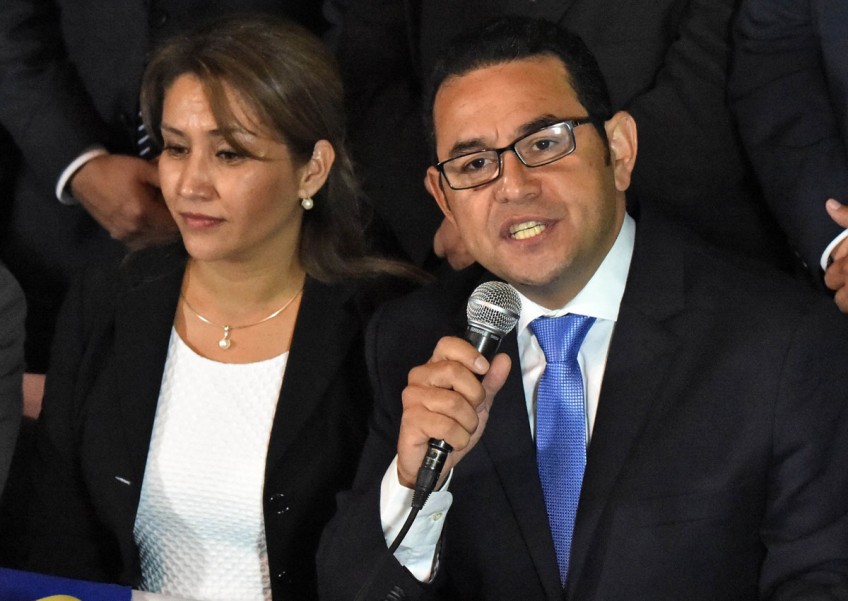 GUATEMALA CITY - Guatemalan comedian Jimmy Morales' entry into politics started out sounding like a joke, but he is now laughing all the way to the presidential palace after a massive corruption scandal upended the election.

Morales, a comic actor and TV personality with no political experience, had just 0.5 percent support in April, at the beginning of his presidential campaign.

But the conservative candidate won a landslide victory in a run-off election Sunday.

Morales rode a wave of disgust among ordinary Guatemalans, who deserted the traditional political elite in outrage over a series of corruption scandals that culminated in the resignation and jailing of president Otto Perez just days before the first-round vote.

In a climate of widespread disdain for politics as usual, Morales' total lack of political experience was seen as a plus.

He declared victory Sunday night, thanking Guatemalans for giving him a "mandate... to fight the corruption that has consumed us." "My commitment remains to God and the Guatemalan people, and I will work with all my heart and strength not to defraud you," he said.

Morales, 46, is famous for his 2007 film "A President in a Sombrero," in which he plays a country bumpkin cowboy named Neto who nearly gets elected president by accident.

Neto surges in the polls by making a string of empty promises on the campaign trail, but ends up dropping out of the race and returning to his hometown.

In one of the film's best-known scenes, he promises to build a bridge for residents of one downtrodden district. When informed there is no river there, he announces, "Then we will build them the rivers they need!"

In real life, the current race is Morales' first foray into national politics, though he once ran unsuccessfully for mayor of his hometown.

Morales studied management at university, but never finished his degree.

Running for conservative party FCN-Nacion, he has led a light-hearted campaign, cracking jokes at rallies but giving few concrete details on his policy plans.

"For 20 years, I've made you laugh. I promise that if I become president, I won't make you cry," he reassured voters.

After surging in the polls, he hastily drafted formal policy proposals - which he had not done until then. He adopted the campaign slogan, "Not corrupt, not a thief." Political analyst Phillip Chicola said Morales benefited from being a political "outsider," but warned he lacked a true political base.

"The vote for Jimmy is fragile and circumstantial. His party doesn't have any real organization. The vote was a rejection of (traditional) candidates because of the corruption crisis," he said.

Morales will have to govern with just 11 seats in the 158-seat Congress.

While Morales is seen as uncontroversial, his party is not: It was founded in 2008 by former military officers accused of committing atrocities during Guatemala's civil war (1960-1996), which killed some 200,000 people.

Morales has denied the party has anyone linked to abuses in its ranks.

But one of its newly elected lawmakers is Edgar Ovalle, a former officer accused of human rights violations during the war.

Morales, who hosts a comedy show on TV and also produces movies, is married with four children.