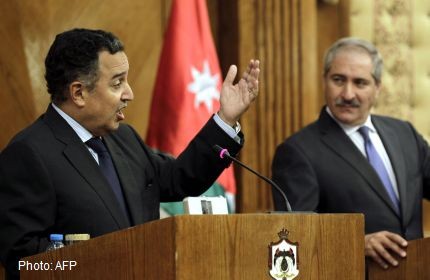 AMMAN - Jordan on Sunday condemned chemical attacks in Syria, urging punishment for those responsible, days before it is due to host a meeting of Western and Muslim military commanders on Syria.

"If (the attacks are) proven, those who have used chemical or any non-traditional weapons must be held accountable for such a criminal act," he said.

The Syrian government denies the accusations and counters that the rebels used chemicals, including on Saturday on soldiers who tried to storm an insurgent neighbourhood in Damascus.

Jordan Prime Minister Abdullah Nsur, whose country is home to more than 500,00 Syrian refugees, said last week that the United States is providing Amman with technical assistance against any possible chemical threat from neighbouring Syria.

Judeh said on Sunday that Jordan "prepared plans two years ago to deal" with any possible the threat of chemical attacks from Syria.

Jordan is preparing to host a meeting in the coming days of top military commanders from the United States, Saudi Arabia, Qatar, Turkey, Britain, France, Germany, Italy and Canada to discuss the war in Syria.

A Jordanian official said on Saturday the meeting would be an opportunity to "examine the questions linked to the security of the region and the repercussions of the Syrian crisis, as well as means of military cooperation to assure the security of Jordan".

Judeh said the meeting "has been scheduled for months."

"The meeting is not a reaction to what happened recently in Syria. It is one of a series of meetings of the army chiefs of countries concerned about the situation in Syria," he added.

"At the same time, the meeting will discuss the situation and scenarios on the ground, especially after the recent dangerous developments. The army chiefs have to have comprehensive talks and examine the impact on the region."