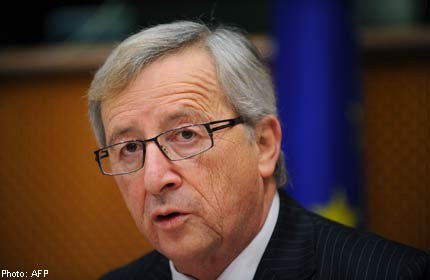 The EU parliament will meet on Tuesday to decide whether to name Jean-Claude Juncker as the next Head of the European Commission.

STRASBOURG, France - The EU's newly-elected parliament decides Tuesday whether to name Jean-Claude Juncker as next head of the powerful European Commission, but with some lawmakers opposed, the vote could be tight.

Expected at around 1030 GMT, the vote paves the way to an extraordinary European Union summit the next day in Brussels to name a new EU foreign policy chief as well as a successor to Herman Van Rompuy as EU Council president.

Despite stiff opposition from British Prime Minister David Cameron, Juncker was nominated by EU leaders last month in a 26-2 vote to step into the shoes of outgoing Commission president Jose Manuel Barroso.

At Wednesday's summit the 28 leaders need to agree unanimously on the successors to Catherine Ashton as top diplomat and to Van Rompuy.

In parliament, Juncker needs an absolute majority of 376 votes in the 751-seat assembly.

He is hoping to muster most of the 480 votes of the two leading mainstream parties - the conservatives and social-democrats - as well as the smaller liberal group.

But some 60 MEPs from the two main groups are reportedly set to withhold support, meaning Juncker needs to rally members in the Greens group.

If Juncker wins the parliament's backing as widely expected, his next hurdle is to put together a new Commission for the next five years made up of one member per EU member state.

With nations at each others' throats for the key Commission jobs - economic affairs, energy, competition - the composition of each commission is always a difficult affair.

This one has thrown up a new challenge. Juncker is worried at the lack of women being proposed by member states to join his team.

Last week the women of the current Commission, which steps down in autumn, launched a campaign to get "10 or more" female candidates named to the next EU executive.

A letter circulated for signature by the nine women says Juncker needs to improve on the record of Barroso, who gave around a third of jobs to women as commission head over the past decade.

"The European Union is committed to making continual progress towards gender equality. Such progress demands an increase, not a decrease in the number of female commissioners," the letter says.

Having at least nine women on his executive is one of the conditions set by the Liberals to back Juncker.

But so far, capitals are putting forward only men.

The names of a few female candidates are circulating, among them Italian Foreign Minister Federica Mogherini, and current Bulgarian commissioner Kristalina Georgieva - both as candidates to take over from foreign policy chief, Britain's Catherine Ashton.

If Juncker passes the parliament hurdle, he will submit a full line-up of 28 commissioners to lawmakers in October.