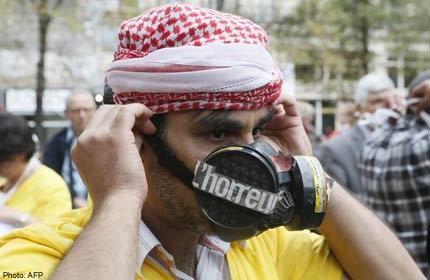 A man wears a gaz mask as he takes part in a rally on August 24, 2013 in central Paris to support the Syrian rebel movement as Syrian government has denied using chemical weapons, and state television said today soldiers entering a rebel-held area had "suffocated" on poison gases deployed by "terrorists."

Kerry discussed the attack on rebel-held areas near Damascus with Walid al-Muallem "to make clear that if, as they claimed, the Syrian regime has nothing to hide, it should have allowed immediate and unimpeded access to the site rather than continuing to attack the affected area to block access and destroy evidence," the official said.

The top US diplomat also made a series of calls about evidence relating to the attack, speaking Saturday to the foreign ministers of Jordan, Turkey and Saudi Arabia, as well as the secretary-general of the Arab League.

"In all these calls, the Secretary emphasised the importance of quickly determining the facts and underscored the seriousness and gravity of any chemical weapons use," said the US official, who spoke on condition of anonymity.

US President Barack Obama is under mounting pressure to act following reports of the alleged chemical weapons attack, which Doctors Without Borders said had killed 355 people due to "neurotoxic" symptoms.

Opposition groups say the reported attack was carried out by Syrian President Bashar al-Assad's forces and that it killed more than 1,000 people.