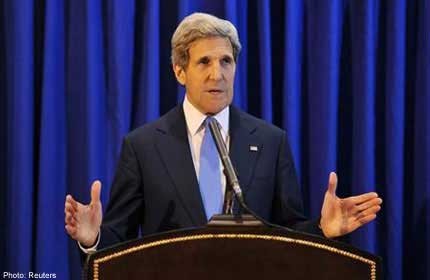 BOGOTA, Distrito Capital de Bogota - US Secretary of State John Kerry urged Palestinians "not to react adversely" Monday to Israel's announcement of more settlement building, and stressed the importance of "getting to the table quickly."

The chief US diplomat, visiting Colombia, said that Israel's announcement on new settlements was "to some degree expected" and he did not think it would become a "speed bump" to a recently relaunched peace process.

However, he said it underscored the importance of peace talks this week.

"Once you have security and borders solved, you have resolved the question of settlements," Kerry said at a joint press conference with Colombian Foreign Minister Maria Angela Holguin, according to a transcript released by the State Department.

"And so I urge all the parties not to react adversely or to provoke adversely, whichever party may do one or the other in any way, but to understand the importance of the moment that everyone has achieved here, and that is to move forward quietly, carefully, deliberately to negotiate the major issues."