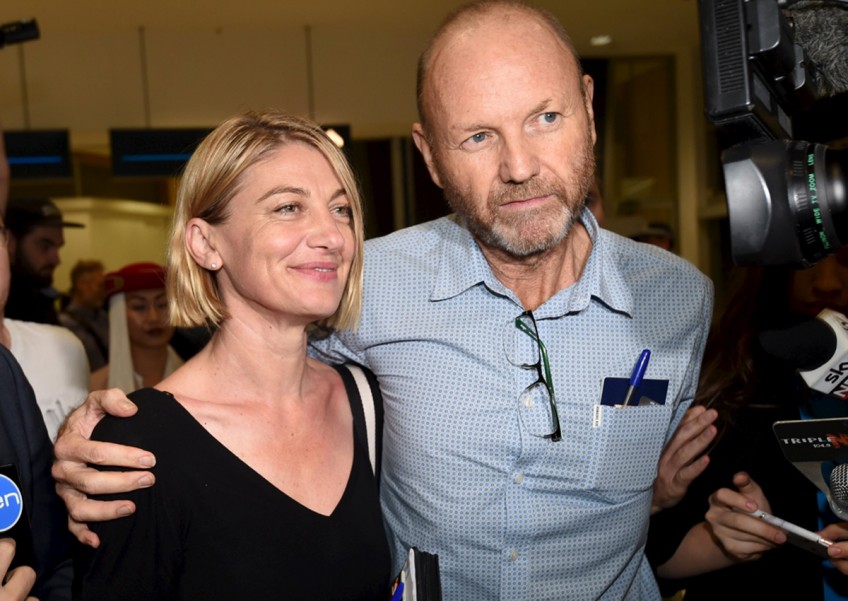 Journalist Tara Brown and producer Stephen Rice, who were among the 60 Minutes crew detained in Lebanon, arriving in Sydney last Thursday. They had been charged with kidnapping and spent two weeks in jail in Beirut.
Reuters

When Australian journalists are jailed while working abroad, it typically prompts a national outcry for their immediate release. But the imprisonment in Lebanon two weeks ago of one of Australia's most high-profile reporters, Ms Tara Brown, drew a muted response and sparked questions about when journalists should break the law.

Ms Brown was detained along with a three-man crew from Channel Nine's top-rated 60 Minutes programme following a botched attempt to help an Australian mother "recover" her two children from her estranged husband in Beirut.

Four members of a team hired to carry out the operation, from an outfit called Child Abduction Recovery International, were detained as well. The team snatched the children from their grandmother and a nanny on April 7.

The television crew and mother, Ms Sally Faulkner, were charged with kidnapping and spent two weeks in a squalid cell before being released last Wednesday.

The members of the recovery team, who face similar charges, remain in prison.

This has led to criticism of Channel Nine for allowing the reporters and mother to go free while the recovery team remains holed up in a cramped cell in Lebanon.

There have also been claims that Channel Nine was culturally insensitive and guilty of "white privilege".

"Had the children's Lebanese father brought a crew of Lebanese journalists to Australia to pull the same stunt… it would have been met with an indignant fury," wrote commentator Ruby Hamad in The Age.

The crew finally returned to Australia last Thursday. Their actions have raised questions about media ethics versus the growing pressure to boost ratings.

Ms Faulkner was allowed to spend some time in Lebanon last Friday with her children, Lahela, five, and Noah, three.

In return for her estranged husband dropping kidnapping charges against her and the Channel Nine crew, she reportedly had to agree to a divorce and to drop her custody rights - which had been granted by an Australian court in December last year. She also agreed to meet with the children only outside Australia.

According to friends of Ms Faulkner, she and Mr Ali Elamine, who is Lebanese-American, had been amicably separated for two years when he visited her and the children in Australia in May last year.

Ms Faulkner says he told her that he would take the children to Lebanon on holiday for three weeks, but he stayed on and cut off contact between her and the children.

He says that the family had previously lived in Lebanon and that Ms Faulkner had not yet been granted custody when he decided to stay with the children in Beirut.

The broadcaster reportedly paid about A$115,000 (S$120,000) to the recovery team to carry out the failed attempt to recover the children.

A journalist who previously held a senior role at Channel Nine, Mr John Lyons, said the programme's decision to involve itself with former soldiers whose full-time job is to kidnap, or re-kidnap, children demonstrated "seriously flawed judgment".

"Clearly, accountability broke down," he wrote in The Australian last Friday. "The public mood seems to have swung strongly against 60 Minutes. The line that has most caught on in the public's mind… is: How would Australians feel if this had occurred on the streets of Sydney or Melbourne?"

The broadcaster has launched an internal review.

The saga has raised questions about so-called chequebook journalism, in which news outlets pay for stories or interviews.

Some media commentators said journalists could - and should - break the law if it is the only way to disclose information that is in the public interest. But this is not an open invitation to commit crimes - and whether 60 Minutes can justify its conduct as being in the public interest is far from clear.

"The reputation of the Nine Network, its journalists and by implication the media as a whole has been sullied," said an editorial in the Sydney Morning Herald last Friday.