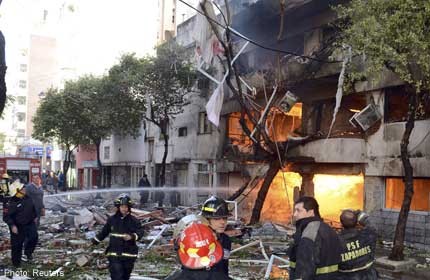 A natural gas explosion wrecked a tall apartment building in the Argentine city of Rosario on Tuesday, killing at least eight people and injuring 60.

Officials said 19 people were unaccounted for.

Dozens of people were trapped for a time in the upper floors of the burning building as a plume of smoke billowed over the country's third-largest city. The building's front and back facades were ripped open, exposing the shattered remains of apartments inside.

Fire - fighters pulled people out of windows and off balconies as the lower floors burned.

The explosion damaged other surrounding blocks - which included schools, shops and banks -and fearing a collapse, police closed everything within a five-block radius, AP reported.

People within a 2km radius of the explosion, including 11 schools, were evacuated as the gas supply to the building could not be cut off.

Civil defence officers rescued survivors via the roof of the next-door supermarket.

Rosario Mayor Monica Fein confirmed the death toll and said the blast was likely caused by a gas leak. She added that 19 people were on a list of missing. She said: "We're working with our best teams and continue looking under rubble.

We have information that shows that this was clearly an issue with the gas."

Some survivors were outraged and were shown on local television venting their anger on the streets. They said they reported a gas leak about 40 minutes before the blast, which happened at 9.30am, but said their warning calls went unanswered.

The company cut off gas flow after the blast.

The explosion partially dest royed the three buildings in the 10 - storey residential complex, leaving it in serious danger of collapse.

Firefighters said they took three hours to put out the fire.

Buildings were damaged for several blocks surrounding the blast, which sent bricks and glass and cement crashing onto the street.

He said: "The victims are a source of immense pain to all of us, but also to the people who have lost it all. We're here for them."

Argentine football star Lionel Messi, who was born in Rosario, sent his condolences through his foundation.

"Sending strength and lots of energy to the family members of the victims of today's regrettable tragedy," he said.