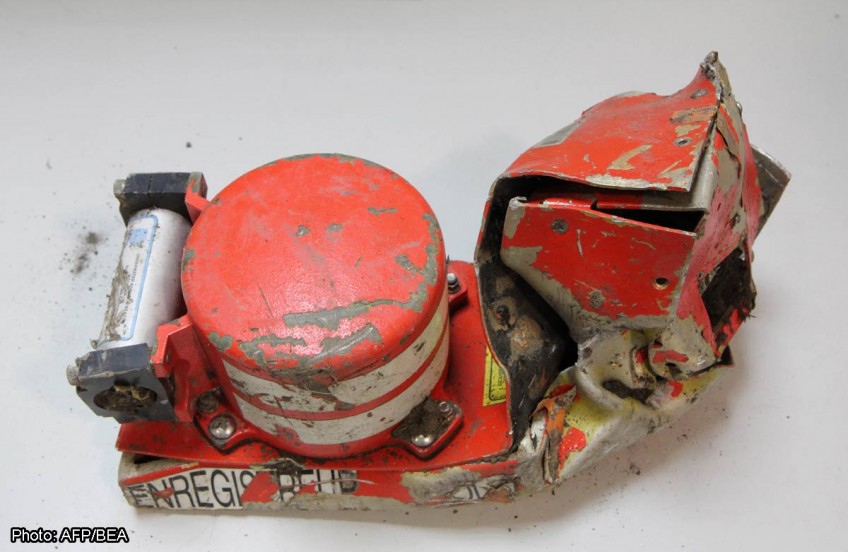 This handout picture taken on March 25, 2015 and released by France's Bureau of Investigation and Analysis (BEA), shows the Cockpit Voice Recorder (CVR) (blackbox) of the Germanwings Airbus A320 that crashed in the French Alps.

PARIS - A warren of laboratories on the outskirts of Paris is where French investigators could face months of laborious and complex detective work to try to establish what caused a German airline disaster in the French Alps that killed 150 people.

One of the Germanwings Airbus A320's two 'black boxes' was found hours after Tuesday's crash and will come under scrutiny at the spartan offices of France's Bureau d'Enquete d'Accidents (BEA, or office of accident investigations.

A source familiar with the recovery effort said the box found on Tuesday was the cockpit voice recorder. The fate of a separate flight data recorder was not immediately clear. The BEA declined comment ahead of a briefing later on Wednesday.

"The black box has been damaged. We will have to put it back together in the next few hours to be able to get to the bottom of this tragedy," French Interior Minister Bernard Cazeneuve told RTL radio, adding the box was still viable.

The agency's first task will be to establish to what extent the recorder's contents survived the force of the crash, which left a barely recognisable trail of fragments on rocky slopes.

The 'black box' canisters, which are actually bright orange, are designed to withstand 3,400 times the force of gravity on impact as well as extremes of temperature and pressure.

Depending on the type and age of recorder, thermal cladding will be eased out of the box and memory boards taken out of a red plastic sleeve and cleaned, ready for copying and analysis at BEA headquarters in "Building 153" at Le Bourget airport.

If wet, it may be placed in a warm oven to dry. In the event of damage to its circuitry, it will need careful repairs in the laboratories which have functional work benches alongside state of the art scanners and advanced, high-tech equipment.

It was not immediately clear which type of recording device was installed on the 24-year-old Airbus.

Only a handful of people will be allowed to hear the cockpit recordings in a special listening room resembling a recording studio with a multi-track mixer and wall-mounted speakers.

To respect the privacy of pilots, rules say the recordings must never be released, but transcripts may be published in the French agency's final report which can take over a year.

Building those transcripts is not always easy due to cockpit noise or sometimes patchy recording quality, experts say.

The recording of each pilot including radio traffic, as well as ambient cockpit sounds, is stored on separate tracks capable of holding up to two hours of audio. Each must be copied, filtered, translated and synchronised to start building an audio picture of what happened inside the Airbus's cockpit.

Conversations of crew will provide vital clues, but may not necessarily explain the complex sequence behind most crashes. "Crew do not always themselves understand or completely articulate what is going on," said a former crash investigator. One flight expert said the pilot's priority in an emergency was to aviate, navigate and then to communicate.

The BEA has called for cameras to be added to cockpits to aid investigations, something pilot unions oppose. There is also a growing debate over the potential use of live data streaming as an alternative to the decades-old 'black box'.

Even so, investigators will listen to engine noise and analyse every alarm, vibration and thump that might help explain what happened shortly after Flight 9525 reached cruise height.

The voice recorder is just one part of a massive detective operation, involving analysis of the debris, though most investigators dislike the term, saying they are not policemen.

A full anatomy of the Duesseldorf-bound flight depends on finding the flight data recorder, which charts hundreds of parameters that must be downloaded and translated into graphs. "Ideally you need it all: both recorders, radar tracks, the wreckage, operational records," the former investigator said.

The BEA scanners, x-ray machines and in-house electron microscope are among the industry's most advanced. But reports from the crash site suggest it will face a huge forensic task in understanding the shroud of debris scattered across ravines.

Typically, working groups are set up to focus on areas such as airline operations, maintenance and aircraft systems.

A preliminary report may take months and investigations usually take a year or more to run their course.

Under international law, France leads the inquiry because the plane crashed there. Germany, which lost some 72 of its citizens, will take part as the airline's home nation. Airbus and engine maker CFM will be asked to give technical advice.

The crash investigation will try to establish a cause and make any safety recommendations, but will not attribute blame.

That's the task of a judge who on Tuesday carried out the routine step under the French legal system of opening a criminal inquiry: the start of a parallel process that can take years.

The 2009 crash of Air France 447, which triggered the BEA's biggest ever investigation, is only now coming to court.