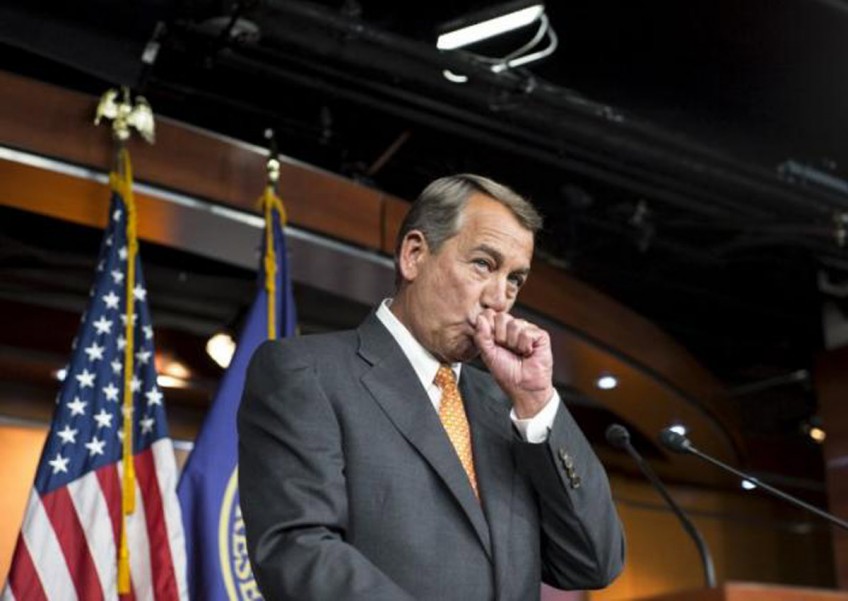 Speaker of the House John Boehner (R-OH) pauses during a news conference on Capitol Hill in Washington on September 10.
Reuters

WASHINGTON - US Senate Democrats on Thursday blocked legislation meant to kill the Iran nuclear deal for a third time, securing perhaps the greatest foreign policy win of President Barack Obama's six years in office and clearing the way to implement the accord.

By a 56-42 vote, the Republican-majority Senate fell short of the 60 votes needed to advance in the 100-member chamber.

Despite an intense and expensive lobbying effort against it, all but four of Obama's fellow Democrats backed the nuclear pact between the United States, five other world powers and Tehran announced in July.

With no more Senate votes this week, the result ensured Congress will not pass a resolution of disapproval that would have crippled the deal by eliminating Obama's ability to waive many sanctions.

A resolution would have had to pass both the Senate and House of Representatives by midnight Thursday, and survive Obama's veto, to be enacted.

The House, where Republicans also have a majority, never voted on the resolution, opting to pass three symbolic Iran-related measures that would not have affected the nuclear deal.

Two presidential hopefuls, Senators Rand Paul and Marco Rubio, missed the vote after a debate in California last night in which Republicans bashed the Iran deal. Two others, Ted Cruz and Lindsey Graham, voted with every other Senate Republican to advance the resolution.

Angry Republicans accused Democrats of denying the disapproval measure its due consideration in order to keep Obama from having to use his veto power.

"It will go into effect without the American people having their say," said John Cornyn, the Senate's second-ranked Republican.

Democrats accused Republicans of staging futile votes to embarrass the White House, while wasting time that could have been spent reaching a budget compromise to avoid a government shutdown on Sept. 30.

Senate Republican Majority Leader Mitch McConnell failed to lure any more Democrats into backing the disapproval resolution after it first came up in the Senate a week ago.

After two failed votes, McConnell sought to raise the political stakes by adding an amendment that would have barred Obama from easing sanctions unless Iran released American prisoners and recognised Israel's right to exist.

With Democrats objecting to adding non-nuclear issues to consideration of the deal, that procedural vote was also blocked, 53-45.