If you were a multi-billionaire, you probably wouldn't mind spending a couple of millions on your child's wedding or party, even if you know that's enough to feed an entire village of hungry people in poverty somewhere in the world.

But for the publicity, fame and glamour, such extravaganzas are probably worth it.

Here is a list of lavish weddings and parties that normal people like us can only dream of, beginning with the most recent.

One would think a wedding between two of the richest families in the largest country of the world would leave no expenses spared.

The Oscars-inspired wedding featured US$2 million (S$2.8 million) performances by Lady Gaga and Jason Derulo and was complete with stars printed with guests' names, like those along the Hollywood Walk of Fame.

The occasion also featured US$500,000 worth of flowers alone, with huge bouquets of red roses atop and surrounding guests' tables and white roses filling every surface of the altar.

Just when you thought it couldn't be any more elaborate, the couple also had a 10-tier cream and gold cake to cut, adorned with huge white sugar flowers.

It's no wedding, but it was no less extravagant.

While this birthday party might be lacking of glamour (and flowers) as compared to the afore-mentioned weddings, the Greek royal family sure know how to hold an 'epic' party, as coined by guests.

Guests on the invite list for the bash on July 1 included aristocracy, royalty, and celebrities like Nicky and Paris Hilton and model Poppy Delevingne.

The Princess knew how to have fun as well, as she donned a Steven Khalil studded and embellished dress accompanied with a long nude tulle skirt.

A spiky crown adorned with flowers and a pair of platform Gucci trainers then completed her look, screaming "fun" from head to toe.

Needless to say, the daughter of the Swarovski empire could ask for as many blings as her body could carry.

Designed by Filipino designer Michael Cinco, Victoria Swarovski's dress cost over S$1.2 million dollars and weighed 46kg, with 500,000 of her family's crystals, according to UK's Mirror. 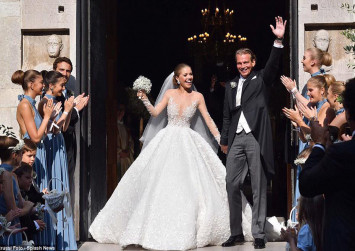 The 23-year-old Austrian singer married Werner Mürz, a property mogul in his 40s, in a three-day affair from June 16 at a luxury five-star Hotel Falisia in Portopiccolo, Italy, according to Business Insider.

But why anyone would want to weigh themselves down (quite literally) on their wedding day is beyond me.

Of course, that comes as no surprise in the wedding of the son of Folorunso Alakija, who is one of the country's richest black women and vice-chair of a Nigerian oil company.

The wedding cake stood at 12-feet tall with eight tiers topped with elaborate iced flowers and doves and reportedly cost up to £10,000 (S$17,900).

American singer-songwriter Robin Thicke also performed in the wedding, with an appearance fee of £150,000 (S$268,700), according to DailyMail.

The wedding night then ended with a spectacular show of fireworks.

And here I am waiting for National Day to see a fireworks' display.

This extremely expensive wedding held at Bangalore Palace in Nov 2016 was the centre of criticism amidst the cash crisis in a country where many are poverty-stricken.

Brahmani Reddy, then 21, tied the knot with Rajiv Reddy, then 25, who is the son of a Hyderabad-based businessman, Vikram Deva Reddy.

The bride's father, Gali Janardhan Reddy, a former state minister who is now a mining boss, flew in dozens of Brazilian dancers, including Bollywood stars, to entertain the guests, according to DailyMail.

Wedding invitations also arrived in a gold-plated box, with a LED screen fitted into the lid.

According to IndiaToday, the venue was set up by film set designers, and the bride's Kanjeevaram saree alone cost 170 million Rupees (S$3.6 mil).

In addition, her jewellery consisted of diamonds, rubies and more, costing up to 980 million Rupees (S$21 mil).

I just wonder how much her outfit actually weighed.

You know your wedding is lavish enough if even the President of your country attends it.

Karapetyan, 23, wed his Georgian bride, Salome Kintsurashvili, 25, at Safisa, an upscale venue in Moscow last year, according to Business Insider.

The bride had to herself three designer gowns, including an Elie Saab gown with an estimated cost of US$35,000 (S$48,000), according to InStyle.

But to be honest, having the President at my wedding would just be unnecessarily stressful.