At least 1 dead as monstrous Hurricane Michael tears into Florida

'PANAMA CITY - Hurricane Michael claimed its first life after roaring ashore in Florida on Wednesday (Oct 10), flooding homes and streets and toppling trees and power lines in the Gulf of Mexico beachfront area where it made landfall as a raging Category 4 storm.

Florida officials said Michael, packing winds of 250 kmph, was the most powerful storm to hit the state's northern Panhandle area in more than a century.

Michael had weakened to a Category 1 after making landfall, but that still left it an extremely dangerous storm.

Pictures and video from Mexico Beach, a community of about 1,000 people where Michael made landfall around 1:00 pm Eastern time, showed scenes of devastation, with houses floating in flooded streets, some ripped from their foundations and missing roofs.

Roads were filled with piles of floating debris.

After being battered for nearly three hours by strong winds and heavy rains, roads in Panama City were virtually impassable and trees, satellite dishes and traffic lights lay in the streets.

"Hurricane Michael is forecast to be the most destructive storm to hit the Florida Panhandle in a century," Governor Rick Scott said.

It is the fiercest storm to hit Florida in a quarter century and the third-most powerful ever to strike the US mainland, roared into the state's Gulf coast on Wednesday (Oct 10) with tree-snapping winds, towering waves and torrential rains. 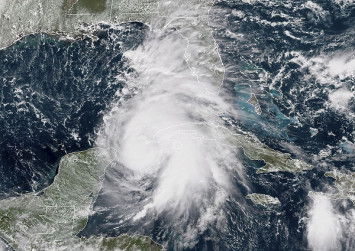 While the state is reeling from the devastation brought by Hurricane Michael, at least two other systems - Tropical Storms Leslie and Nadine - are being monitored in the Atlantic. It is the first time there are three named Atlantic storms at the same time in October with winds in excess of 65 mph (104kmph).

Michael, whose rapid intensification as it churned north over the Gulf of Mexico caught many by surprise, made landfall early in the afternoon near Mexico Beach, about 20 miles (32 km) southeast of Panama City in Florida's Panhandle region, with top sustained winds reaching 155 miles per hour (249 kph).

The storm came ashore as a Category 4 hurricane on the five-step Saffir-Simpson wind scale. Its sustained winds were just 2 mph (3.2 kph) shy of an extremely rare Category 5.

As predicted, the storm was downgraded hours later to a still-formidable Category 3 with maximum sustained winds of 125 mph (205 kph) and higher gusts as it pushed inland to the Alabama-Georgia border.

Causing major disruptions to oil and gas production in the Gulf even before its arrival, the storm was forecast to unleash waves as high as 4.3 m above normal sea levels in some areas, the National Hurricane Center said.

"My God, it's scary. I didn't expect all this," said Bill Manning, 63, a grocery clerk who fled his camper van in Panama City for safer quarters in a hotel, only to see the electricity there go out.

"Panama City, I don't know if there will be much left."

The US Air Force shuttered a command-and-control centre as Hurricane Michael tore into the Florida coast, a top general said on Wednesday, as the military mobilized thousands of troops to help tackle the monster storm's impact.

"Before the storm ever arrived we'd actually transferred command and control capability to another facility," O'Shaughnessy told Pentagon reporters.

Tyndall is a major facility for protecting the air space over the continental United States, US Virgin Islands and Puerto Rico.

The four-star general added that some Florida residents may have been surprised by the rapid growth of the storm.

"Where that becomes a factor is with the evacuation of some of the local populations," he said.

Television news footage showed floodwaters up to the roofs of many homes in Mexico Beach. The fate of about 280 residents who authorities said defied evacuation orders was unknown.

Twenty miles to the south, floodwaters were more than seven and a half feet (2.3 meters) deep near Apalachicola, a town of about 2,300 residents, National Hurricane Center Director Ken Graham said. Wind damage was also widespread.

"There are so many downed power lines and trees that it's almost impossible to get through the city," Apalachicola Mayor Van Johnson said.

The Federal Emergency Management Agency (FEMA) said on Tuesday that an estimated 500,000 Florida residents had been ordered or urged to seek higher ground before the storm in 20 counties spanning a 200-mile (320-km) stretch of shoreline.

But Brad Kieserman of the American Red Cross said Wednesday that as many as 320,000 people on Florida's Gulf Coast had disregarded mandatory or voluntary evacuation notices.

An estimated 6,000 evacuees took cover in emergency shelters, most of them in Florida, and that number was expected to swell to 20,000 across five states by week's end, Kieserman said.

Even before Michael made full landfall, it was whipping trees with its winds and flooding the town of Port St. Joe, just south of Mexico Beach. "It feels like you don't know when the next tree is going to fall on top of you because its blowing so ferociously," said Port St. Joe Mayor Bo Patterson.

"It's very, very scary. We have trees being uprooted, heavy, heavy rain."